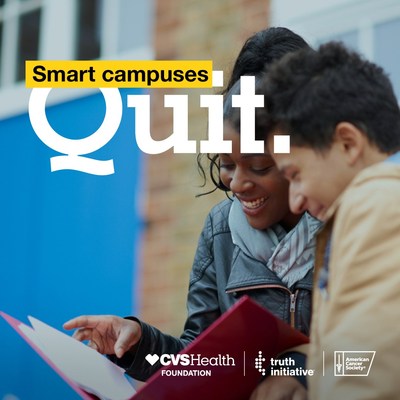 WOONSOCKET, R.I., 2017-Sep-20 — /EPR Retail News/ — The CVS Health Foundation, American Cancer Society and Truth Initiative today (Sept. 19, 2017) announced that grants are now available to help U.S. colleges and universities advocate for, adopt and implement 100 percent smoke- and tobacco-free campus policies. The grants are part of aggressive efforts by all three organizations to deliver the first tobacco-free generation by accelerating and expanding the number of campuses across the country that prohibit smoking and tobacco use.

The announcement of newly available grants coincides with the awarding of $1.2 million in grants to 126 schools who are working toward a tobacco-free campus policy, the largest number of schools to do so at any one time. Spanning the U.S., the campuses include 43 major academic institutions, including Stanford University and University of Pittsburgh; 34 Historically Black Colleges and Universities (HBCUs) including Howard University; and 49 community colleges. Grantees range from colleges in the early stages of building campus support for going tobacco-free to those that have adopted policies and need support to successfully implement them.

The grants delivered through Truth Initiative and American Cancer Society are part of Be The First, CVS Health’s five-year, $50 million initiative that supports education, tobacco control, and healthy behavior programming with a goal of helping to deliver the nation’s first tobacco-free generation. CVS Health’s efforts targeting college students meet an urgent and critical need. Of the roughly 20 million college and university students in the U.S., more than 1 million have been projected to die prematurely from cigarette smoking.

“We are at a critical moment in our nation’s efforts to end the epidemic of smoking and tobacco use, and expanding the number of tobacco-free college and university campuses is an important step in our efforts,” said Eileen Howard Boone, President of the CVS Health Foundation. “We’re confident our strategy will drive a significant decline in the number of new college-age smokers, and contribute to the progress being made where a tobacco-free generation in the U.S. seems possible.”

With the CVS Health Foundation’s support, the American Cancer Society and Truth Initiative programs help students, faculty and staff develop and execute strategies that are customized to meet the campuses’ unique needs and move the schools toward a 100 percent smoke- and tobacco-free environment. Each organization also provides technical assistance and other resources to schools, including education, communications, support to quit smoking and evaluation.

According to a new survey from CVS Health, public support for smoke- and tobacco-free campus policies remains strong. The results released today revealed that three in four Americans (73%) and eight in 10 current U.S. college students (78%) indicated their support for policies that prohibit smoking and other tobacco use on college campuses. At the same time, 57 percent of U.S. college students say a tobacco-free campus is important to them when considering applying to or attending a college. The findings come from a public opinion poll conducted by Morning Consult for CVS Health in August 2017. For more findings, visit www.cvshealth.com/CampusSurvey.

“While we have made great progress driving down the smoking rate to 6 percent among youth, the prevalence of smoking by young adults is 14.2 percent and those who attend college have a higher risk of initiating and experimenting with smoking,” said Robin Koval, CEO and President of Truth Initiative, the national public health organization that directs and funds the truth campaign. “With 99 percent of smokers starting before age 26, college campuses are critical in preventing young adults from starting tobacco use, aiding current smokers in quitting and reducing exposure to secondhand smoke for all. We are thrilled to be working with the CVS Health Foundation to provide grants to minority-serving institutions, HBCUs, and community colleges to give them the tools to go tobacco-free and be the generation that ends smoking.”

“Tobacco is the single largest preventable cause of disease and premature death in the United States. Cigarette smoking is responsible for approximately 30 percent of all cancer deaths, killing up to half of its users,” said Gary Reedy, CEO of the American Cancer Society, “By partnering with the CVS Health Foundation to create tobacco-free campus environments, we can reduce youth tobacco exposure, prevent students from becoming addicted, and ultimately, reduce the number of people who get sick and die from cancer and other tobacco-related diseases.”

Since the launch of its tobacco-free college program in 2016, the CVS Health Foundation has awarded more than $3 million in grants to 146 U.S. colleges and universities as part of an ongoing commitment to accelerate and expand the number of 100 percent tobacco-free campuses. The U.S. Department of Education reports there are approximately 4,700 U.S. colleges and universities, many of which have more than one campus. Yet, only 1,611 campuses are 100-percent smoke- and tobacco-free, according to an Americans for Nonsmokers Rights analysis.

To see the full list of colleges supported by these grants and for more information on the grant application process, please visit http://www.cvshealth.com/tobaccofreecampus.

About the CVS Health Foundation
The CVS Health Foundation is a private charitable organization created by CVS Health that works to build healthier communities, enabling people of all ages to lead healthy, productive lives. The Foundation provides strategic investments to nonprofit partners throughout the U.S. who help increase community-based access to health care for underserved populations, create innovative approaches to chronic disease management and provide tobacco cessation and youth prevention programming. We also invest in scholarship programs that open the pathways to careers in pharmacy to support the academic aspirations of the best and brightest talent in the industry. Our philanthropy also extends to supporting our colleagues’ spirit of volunteerism through Volunteer Challenge grants to nonprofits where they donate their time and fundraising efforts. To learn more about the CVS Health Foundation and its giving, visit www.cvshealth.com/social-responsibility.

About The American Cancer Society
The American Cancer Society is a global grassroots force of 2 million volunteers saving lives in every community. As the largest voluntary health organization, the Society’s efforts have contributed to a 25 percent decline in cancer death rates in the U.S. since 1991, and a 50 percent drop in smoking rates. For more information, to get help, or to join the fight, call us anytime, day or night, at (800) 227-2345 or visit cancer.org.