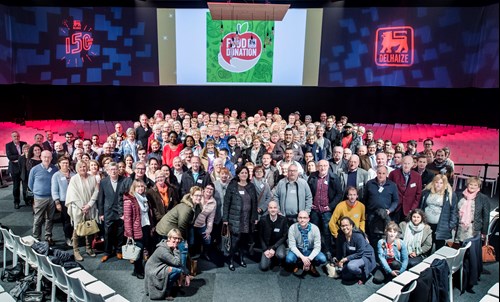 Zaandam, the Netherlands, 2017-Nov-21 — /EPR Retail News/ — Delhaize Belgium has long been a leader in tackling food waste, including the donation of 7 million meals from unsold food products over the past five years. The brand marked its progress with a celebration on November 15 with associates, business partners and volunteers and pledged to achieve its 2020 goal to redistribute at least half of all unsold food to persons in need.

Reducing food waste has been high on Delhaize’s agenda for more than 26 years. The brand now works with about 200 food banks and other charitable associations in communities throughout Belgium and Luxembourg. In Belgium alone, 15% of people live below the poverty line and 144,000 turned to food banks for assistance last year.

In 2012, Delhaize became the first retailer in Belgium to donate fresh products – such as fruits, vegetables and bread – along with dry goods. The project is already being used in nearly all 130 Delhaize supermarkets as well as in its distribution centers. Further, over 400 of the independent Delhaize stores (AD Delhaize and Proxy Delhaize) have similar initiatives.

Delhaize is constantly looking to improve the process, from logistics to food safety, and is exploring new partnerships to donate even more products, which currently amount to 150 meals per supermarket per day. At the same time, Delhaize limits its own food waste as much as possible by monitoring and adjusting store-specific orders.

Sustainable development – including the goal of zero waste – is one of the pillars of Delhaize’s local strategy and supports key elements of the Ahold Delhaize Better Together framework.