Olivier Plas joins in order to drive regional growth, to strengthen the cooperation with customers as well as to further extend the Company’s relationship with business partners.

Intershop is already well represented by strong business partners, such as Accenture Interactive, iStone and Tieto. As a result, there are some well-known B2C and B2B companies in the Nordics using the Intershop commerce engine to grow their businesses internationally, increase efficiencies, improve customer satisfaction and exceed customer expectations.

Gerrit Enthoven, Director Sales EMEA West at Intershop said, “Olivier brings a lot of knowledge to the table, with many years of experience in both sales management and business consultancy of IT businesses in the Nordics, at SAP, itelligence, Stibo Systems and MultiQ.”

One of Plas’ first engagements with Intershop will be at the D-Congres in Göteborg, on Thursday March 9th.

Intershop Communications AG (founded in Germany 1992; Prime Standard: ISH2) is the leading independent provider of omni-channel commerce solutions. Intershop offers high-performance packaged software for internet sales, complemented by all necessary services. Intershop also acts as a business process outsourcing provider, covering all aspects of online retailing up to fulfillment. Around the globe more than 300 enterprise customers, including HP, BMW, Würth, and Deutsche Telekom run Intershop solutions. Intershop is headquartered in Jena, Germany, and has offices in the United States, Europe, Australia, and China. More information about Intershop can be found online at www.intershop.com.

This news release contains forward-looking statements regarding future events or the future financial and operational performance of Intershop. Actual events or performance may differ materially from those contained or implied in such forward-looking statements. Risks and uncertainties that could lead to such difference could include, among other things: Intershop’s limited operating history, the unpredictability of future revenues and expenses and potential fluctuations in revenues and operating results, significant dependence on large single customer deals, consumer trends, the level of competition, seasonality, risks related to electronic security, possible governmental regulation, and general economic conditions. 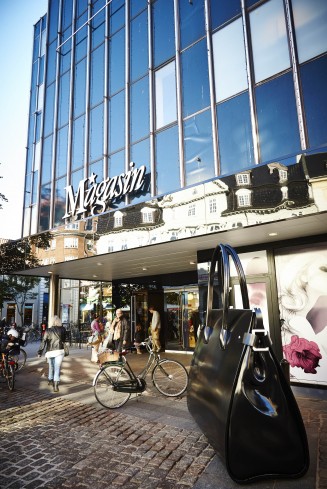 London, 2016-Nov-08 — /EPR Retail News/ — Debenhams is adding a seventh site to the highly successful Magasin du Nord department store chain in Denmark with a new store planned to open in Aalborg in 2018.

The7,500 square metre site is the latest addition to Debenhams’ highly successful wholly owned department store chain in Denmark which offers fashion, beauty, homewares and gourmet foods. Located in the fourth biggest city in country the new Magasin store will be an anchor site in Aalborg’s Frils Shopping Centre.

Debenhams acquired Magasin du Nord in 2009. Performance of the chain has continued to be strong with three Magasin du Nord sites tracking in Debenhams’ top ten stores in terms of turnover.

The £12m (100m Kr) investment into the new Aalborg site promise to bring a strong department store concept to the North Jutland costumer.

Debenhams International Director David Smith said, “We are delighted to strengthen our presence in Denmark in line with our strategy to drive our international expansion. The Magasin du Nord is extremely successful with a strong mix of contemporary brands. We look forward to welcoming new customers to our product offer in Aalborg.”

Magasin du Nord adopted its name in 1879 previously trading under the name of Emil Vett & Co. in Aarhus.  The brand has six department stores operating in Denmark and was acquired by Debenhams in 2009.

Debenhams is a leading international, multi-channel brand with a proud British heritage which trades out of more than 240 stores across 27 countries.  Debenhams gives its customers around the world a unique, differentiated and exclusive mix of own brands, international brands, and concessions.

The Copenhagen-based jeweller behind the Pandora bracelets range is set to venture into online publishing to help it to stay in contact with its millions of customers worldwide.

The first issue of the online magazine will launch on 20th June 2011 and will be sent to the 1.6 million members of their website-based Pandora Club.

The magazine will feature behind the scenes insights into the brand, fashion shoots, style tips and the stories behind customer’s purchases of Pandora jewellery and bracelets. Published six times per year, the magazine will initially launch in an international format which the company eventually hopes to be able to adapt with local content such as special events and promotions.

The launch of the magazine marks an important step in the evolution of the company. Since the UK launch in 2006 the company’s product range, which now includes rings and watches, has been selling at a phenomenal rate. The company has managed supply and demand successfully, due in large part to its integrated designs, manufactures and distribution.

Founded in 1982, Pandora jewellery is today sold in more than 55 countries on six continents through over 10,000 points of sale, including more than 450 Pandora branded concept stores as well as online from stores such as thejewelhut.co.uk.

Whilst the financial projections were made successfully, what could not have been seen is the way in which consumers have taken the brand to their hearts. Pandora bracelets have become very different from a standard jewellery product; it has taken on a life of its own and has become a part an important constituent of the lives of its wearers. This symbiotic relationship has created many repeat customers who have made their charm bead collection an integral part of their lives.

Mikkel Berg, executive marketing director, quoted in a recent Marketing Week article, said: “This magazine rewards our customers’ loyalty and gives new opportunities for them to share their thoughts with each other and the company.”

To ensure that you get your copy sign up online on the Pandora website at pandora.net. For more information on Pandora jewellery, visit popular UK jewellery site the Jewel Hut at http://www.thejewelhut.co.uk.