After the successful launch of BOHEM nail jewellery, BOHEM is now releasing their first pair of nails for celebrities. These experimental nails were produced in their Birmingham based studios. 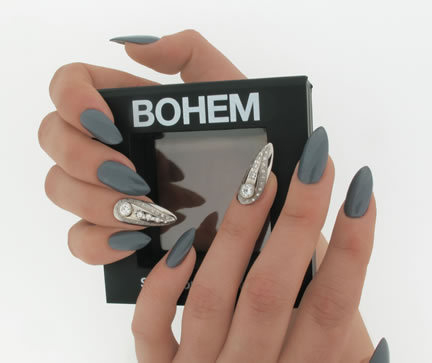 The objective:  To design and make a pair of bespoke accent nails to fit Rihanna on her World Tour 2013.

“We could see that Rihanna loves her almond shaped nails and she obviously likes diamonds. Her 2013 tour was called “Diamonds” with her debut single “Diamonds in the sky.” In the past we have seen celebrities wearing metal nails but again BOHEM is pushing it further. The ‘Nails for the Stars’ are made with precious metals and precious gems to fit the hands and the style of that particular celebrity ” – Joe Vella creative director.

Stand out. Show off.

Keeping the ‘Diamonds in the Sky’ theme, the design team went for a multi layered 3d nail, keeping in mind the end result should look classy and slick. The layers represent the sky with ‘star set’ diamonds, set in platinum representative of her platinum sales. Also the large brilliant cut diamond represents the biggest star of all.

Bespoke by its own inspiration

The jewellery and stone setting were completed by artists and jewellers from the Jewellery Quarter in Birmingham. This pair of nails is truly unique in every way. BOHEM will be designing other exclusive ‘Nails for the Stars’, each one bespoke by its own inspiration. Like any other BOHEM jewellery, the ‘Nails for the Stars’ will be hallmarked by the Birmingham Assay Office to certify the quality of the diamonds, gold, platinum, silver or other metals used.

The concept  of ‘Nails for the Stars’ is for BOHEM to work alongside stylists to produce the ultimate bespoke designs within the jewellery industry. These can be made as accent nails to compliment the celebrity’s manicure or as full sets. Soon BOHEM will unveil a unique range of gold, platinum, and diamond nails inspired by stars like Beyonce, Jessie J, Lady Gaga, Rita Ora, X factor judges and winners, and many more.

About BOHEM
BOHEM is a UK based company and they are proud to say that all their jewellery is hand made in the UK. They also have a large Christmas selection of sterling silver BOHEM nails to choose from online at www.bohem.co.uk starting from £15. Ideal as Christmas gifts, beautifully packed also include extra strong adhesive tabs for your assured fixing.