LONDON, 2014-7-30 — /EPR Retail News/ — Five store openings took place across the Group in June, for B&Q and Screwfix in the UK and Brico Dépôt France.

B&Q UK & Ireland opened a store at the Castle Retail Park in Penrith, replacing the former branch on Bridge Street. It covers an area of 3,810m2 and has created 40 additional jobs in the area. The store employs 60 people in total with the oldest member of staff being 65. The store includes a TradePoint counter, open seven days a week for local tradesmen. It was opened by local Conservative Councillor John Thompson and children from Orton C of E Primary School, who have received a donation of paint from B&Q to help with essential exterior maintenance work over the summer. 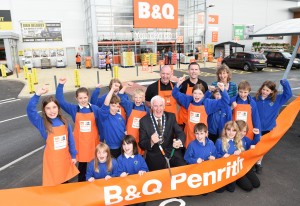 Screwfix in Lurgan and Londonderry, Northern Ireland, and Canning Town in East London

The three stores occupy a total sales area of 1,421m2 and have created 37 jobs between them. The Lurgan and Londonderry stores both include a Trade+ counter, meaning they have dedicated sales areas for plumbers and electricians – through Plumbfix and Electrifix – as well as offering click & collect and home delivery features as standard.