PARIS, 2014-10-9— /EPR Retail News/ — This week, French magazine Enjeux les Echos published a list of companies in the CAC 40 which were found to be the most committed to a CSR strategy. Carrefour was in joint first position, alongside Airbus, Schneider Electric and Lafarge.

The survey conducted by Enjeux les Echos set out to gauge just how committed companies in the CAC 40 are to CSR. The magazine joined forces with the CSR Institute and a whole panel of experts to put together a questionnaire and a survey structured around eight key areas: Transparency, Governance, Economic Model, Supply Chain, Products and Client Relations, Ethics and Respect for Human Rights, Environment and Social Relations.

The assessment ranked Carrefour in joint first position. Carrefour’s work on tackling food wastage in particular was recognised. Its “antigaspi” (anti-food wastage) plan is seen as one of the key components of the Group’s Sustainable Development policy. Several initiatives were recognised, such as the changes that have so far been made to the use-by dates on more than 300 products. Carrefour has already removed the optimum use-by dates on products such as salt, sugar, etc. Also worth mentioning is that when unsold products are three days away from their use-by dates, Carrefour gives them to charities. This resulted in the equivalent of 68 million meals being given away last year.

In addition to tackling food wastage, Carrefour is also using methanisation as means of making use of unavoidable organic waste. Through this process, methane can be produced from store waste and then reused to power delivery lorries – an initiative that looks very promising following the successful tests on three vehicles. And another of the Carrefour Group’s priorities is to reduce the amount of packaging it uses, getting its suppliers involved in its anti-waste strategy. 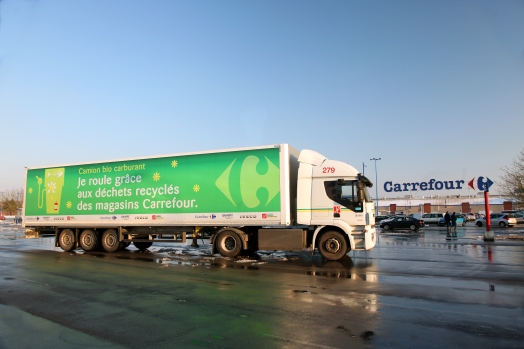