WEST CHESTER, Pa, 2014-10-16— /EPR Retail News/ — Ellen DeGeneres, who announced the creation of her new lifestyle collection, E.D., in July, will launch E.D. On Air, a new seasonal home collection created especially for QVC, on Friday, October 24 at 8 PM (ET). DeGeneres will broadcast live from the Los Angeles set of “The Ellen DeGeneres Show” to debut the line.

E.D. On Air will bring together DeGeneres’ love of design, home décor and holiday gift giving across multiple product categories. A noted expert on home design and renovation, DeGeneres’ homes have been extensively covered in publications such as The New York Times, Elle Décor and Architectural Digest. Her first foray into product design will include holiday trim, a selection of holiday tabletop items, throws, scented candles and other decorative accents and gift ideas.

“I am thrilled to launch my home line on QVC,” said DeGeneres. “I wouldn’t do it with anyone else, because QVC combines everything I love—shopping, watching TV and acronyms. LOL.”

“Ellen’s credibility and appeal have allowed her to captivate an incredibly broad audience,” said Doug Howe, executive vice president of QVC. “Her infectious personality and uncanny spirit can be seen throughout this line, and we’re confident that our customers will once again welcome her with open arms.”

Tune in to “E.D. On Air with Ellen DeGeneres” on October 24 at 8 PM (ET) for the debut of DeGeneres’ new line. The E.D. On Air collection is scheduled to be available, while supplies last, beginning October 24 through the QVC apps, by calling 800.345.1515 or by visiting QVC.com.

About Ellen DeGeneres
Beloved television icon and entertainment pioneer Ellen DeGeneres’ distinctive comic voice has resonated with audiences from her first stand-up comedy appearances through her work today on television, in film, and in the literary world.

She hosts the leading daytime entertainment program on television with her hit syndicated talk show, “The Ellen DeGeneres Show.” The show, now entering its 12th season, has won a total of 51 Daytime Emmys.  She has an enormous social media following, with 32.4 million Twitter followers, more than 16 million Facebook fans, over nine million YouTube subscribers, and over six million Instagram followers.

In 1997, DeGeneres was the recipient of the coveted Peabody Award and earned an Emmy ® for writing the critically acclaimed “Puppy Episode” for her hit show, “Ellen,” in which her character came out as a gay woman to a record 46 million viewers.

DeGeneres’ three books have all debuted at #1 on The New York Times Best Seller list.  She has been included in Forbes’100 Most Powerful Women as well as Entertainment Weekly’s 50 Most Powerful Entertainers.  She has hosted the Academy Awards twice, most recently in 2014, garnering the telecast’s largest audience in 14 years.  Her famous Academy Awards selfie was retweeted more than three million times, shattering all Twitter records.

About QVC
QVC, Inc., a wholly owned subsidiary of Liberty Interactive Corporation (NASDAQ: QVCA, QVCB), is the world’s leading video and ecommerce retailer. QVC is committed to providing its customers with thousands of the most innovative and contemporary beauty, fashion, jewelry and home products. Its programming is distributed to approximately 300 million homes worldwide through operations in the U.S., Japan, Germany, United Kingdom, Italy and a joint venture in China. Based in West Chester, Pa. and founded in 1986, QVC has evolved from a TV shopping company to a leading ecommerce and mobile commerce retailer. The company’s website, QVC.com, is ranked among the top general merchant Internet sites. QVC, Q, and the Q Ribbon Logo are registered service marks of ER Marks, Inc.

In addition to Mariano Rivera’s appearance, the grand opening ribbon-cutting celebration will feature Big Lots presenting a $2,500 donation to McKinley Elementary School. “We are excited to join the community and support the children of McKinley Elementary School,” said David Campisi, Chief Executive Officer and President of Big Lots. “We look forward to being a good neighbor of North Bergen for years to come.”

Iconic baseball hero Mariano Rivera will kick off the store opening with an autograph session from 10 a.m. to 12 p.m. Friday, October 17. Rivera is best known for his role as a New York Yankee, where he spent 17 seasons on the mound as a relief pitcher.

“What better way to celebrate our new store in North Bergen than by welcoming New York Yankee great Mariano Rivera to join us on this special day,” remarked Campisi.

To learn more about Big Lots, speak with a company representative, or arrange a store visit, contact Colleen Cleary at (631) 921-5320.

About Big Lots, Inc.
Headquartered in Columbus, Ohio, Big Lots, Inc. (NYSE: BIG) is a unique, non-traditional, discount retailer operating 1,497 BIG LOTS stores in 48 states with product assortments in the merchandise categories of Food, Consumables, Furniture & Home Décor, Seasonal, Soft Home, Hard Home, and Electronics & Accessories. Our vision is to be recognized for providing an outstanding shopping experience for our customers, valuing and developing our associates, and creating growth for our shareholders. For more information, contact MediaRelations@biglots.com or visit www.biglots.com.

Garcon’s sandwich, “88 Express,” is a must-try for Harris Teeter shoppers. For only $3.99, fans can satisfy their appetite with the “88 Express” which features roasted turkey and Virginia ham topped with yellow American cheese, lettuce, and honey mustard on a wheat sub roll. Shoppers can make it a lunch pack for only $4.99. The lunch pack includes the “88 Express” sandwich and your choice of one Chocolate Chunk, Macadamia Nut, Oatmeal Raisin or Cranberry Nut Cookie.

The “88 Express” will be available in the Fresh Foods Market Sandwich Shop in all Washington-area Harris Teeter stores.  Tuesday only, however, Garcon will make an appearance at the Spectrum Center East Harris Teeter to personally introduce shoppers and fans to his Signature Sub Sandwich.  He will also be signing autographs.

Harris Teeter’s Fresh Foods Market offers made-to-order sandwiches and wraps daily and is proud to introduce the “88 Express.”  Be on the look-out for additional Signature Sub Sandwiches this season. 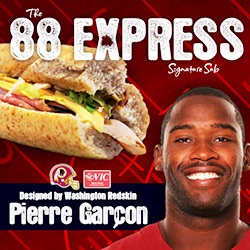 LONDON, 2014-10-16— /EPR Retail News/ — A coalition of the world’s biggest companies and non-profits have launched a global digital platform to drive conversation and action on sustainability.

Collectively, will celebrate and connect the people, places and cutting-edge ideas that are shaping the future. It will focus on giving a global stage to audiences who are already starting to make life choices that strengthen society, as well as minimising their environmental impact. Their desire for workplaces, brands and organisations that align with those values helped inspire this collaboration. The ultimate aim is to make sustainable living the new normal.

Collectively brings together global sustainability non-profit Forum of the Future with some of the biggest companies in the world. Kingfisher, Unilever,  BT Group, The Coca-Cola Company, Marks & Spencer, Carlsberg, Google, Facebook, Microsoft, McDonalds, Nike, PepsiCo and Nestlé to name but a few, are already in and are keen to broaden the coalition to NGOs, youth organisations and other brands.

Collectively is designed to enable audiences to act more sustainably in whatever way they can – from buying, investing and campaigning to sharing an idea they believe in. It represents a unique new approach to the way businesses engage consumers on sustainability, which it is hoped will grow the marketplace for sustainable products and services.

“Encouraging people to choose to live, work and play sustainably on a scale that will genuinely make a difference is one of the world’s biggest challenges. We hope to change that through Collectively. It’s a place to share stories, inspire each other and create the change we need to see in the world. Collectively brings together some of the world’s biggest brands, non-profits and leading social entrepreneurs because we believe that together we can achieve much more, much faster.”

“People often ask me how you encourage businesses to increase their sustainability offer and the answer is straight forward – increase demand for it.  Sadly, there isn’t a silver bullet to do that or we’d have cracked it by now but making this agenda engaging, desirable and affordable for people is key.  We’re a proud supporter of Collectively and are confident that the editorial independence of the site, which will offer inspiring and engaging content, has the potential to create positive change and make sustainable living the new normal.”

About Collectively
Collectively is a non-profit editorial platform, developed alongside VICE Media’s creative services division, VIRTUE, global sustainability non-profit Forum for the Future, and Purpose, leaders in building social movements. The independent editorial team will update the site with stories, information and solutions from the worlds of home, fashion, food, design, architecture, technology and more. The platform’s audience will also be encouraged to submit ideas for the channel around a series of themes that will be regularly refreshed such as healthy homes and the smartest city. Only highly engaging stories with the potential to create positive change will be featured. The original idea for Collectively was sparked by discussions at the World Economic Forum about how to inspire and accelerate the shift towards a more sustainable way of life.

For more information on Collectively:

MANILA, Philippines, 2014-10-16— /EPR Retail News/ — A different kind of traffic along EDSA greeted locals bright and early on the 17th of October, as thousands queued for the grand opening of H&M’s flagship store in the Philippines. After an exciting VIP shopping party two nights prior, the much anticipated store finally opened its doors at 9am this morning filled with dance and music, surprises and opening offers, making fashion and quality at the best price now accessible to everyone in the Philippines!

The giant shopping bag sitting on top of SM Megamall’s Fashion Hall cued the entire metropolis that H&M is now here at last!

More than 2,000 eager customers flocked to line up prior to the store opening. The first 3 shoppers in queue as early as the day before received 6,000, 3,000, and 2,000 pesos worth of shopping, respectively.

“The anticipation over our launch in the Philippines has been intense, and I am proud to welcome Filipino shoppers into our very first store. We hope that we can offer our customers added value through fashion, quality and sustainability at the best price”, says Karl-Johan Persson.

A full assortment of fashion items for women, men, teenagers and children, including athletic wear and lingerie, spans over a 3,000 square meters and 3 floors of shopping space in the flagship store. In celebration of its grand opening, fashion shoppers will be able to continue their shopping frenzy through 12 midnight today. The doors welcomed the fashion crowd with the H&M Studio and an amazing Autumn/Winter 2014 Collection.

Regular store hours of 10am to 10pm will be resumed from October 20.

For more information or to borrow garments please contact: 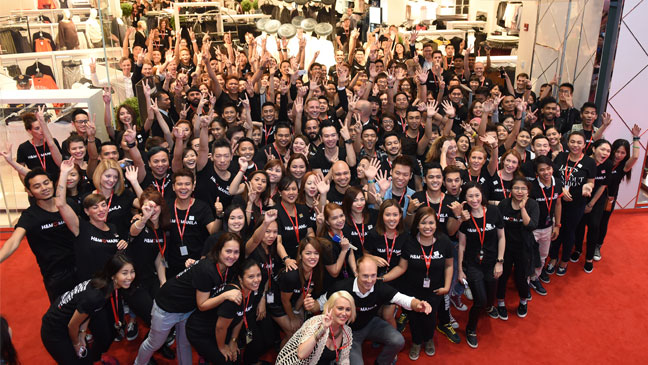