Milton Keynes, UK, 2014-10-13— /EPR Retail News/ — Today, leading retailer Argos has pledged to provide practical skills, access and technology to some of the 9.5 million Brits who are still not online. This is part of its partnership with digital skills charity Go ON UK.

Specially-trained store colleagues will help participants learn the basics of how to use a tablet, connect to and surf the internet, use a search engine, set up email, stay safe online and more. The workshops will run from 25 October through to mid-January 2015, in 120 communities across the UK.

Research released earlier this year from OFCOM shows the number of adults using tablets specifically to go online almost doubled year on year from 24 per cent to 44 per cent[1]. Whilst almost all age groups are more likely to use these handy, portable devices, those in older age groups find them particularly accessible, with use by those aged 35-64 doubling and 65-74 trebling from 5 per cent to 17 per cent.

The increase has been attributed in part to the rise of technology enabled inter-generational communication within families, such as Skype.

From the end of this month Argos Internet Workshops will kick off in stores around the UK.  Up to 10,000 people will be given training and a tablet to help them communicate, connect and develop the digital skills needed to feel confident online.

John Walden, Chief Executive of Home Retail Group, which owns Argos, said: “The digital revolution continues apace, however, millions remain on the side-lines. Argos Internet Workshops have been developed to help people overcome the barriers of access and affordability and improve their knowledge, understanding and confidence in digital technology.

“The internet is becoming increasingly essential in day-to-day life, and offers a world of new possibilities that we believe everyone should be able to access.”

According to research by the BBC[2] into media literacy one in four people are uncomfortable with technology and one in five state they simply don’t know how to use it. Nearly one in five said they didn’t like to try new things on the internet because of worries they would do something wrong.

Baroness Lane-Fox, Chair of digital skills charity Go ON UK, said: “As many areas of everyday life become ‘digital by default’, with a number of government and business services becoming accessibleonlyonline, we need to ensure that everyone has the digital skills needed to participate in our evolving digital age.

“Access, affordability and skills have all been cited as key barriers to bringing people online and this fantastic initiative from Argos is exactly the type of programme we need to help people become more confident with technology.”

Internet Workshops will start at the end of this month. Following the workshop, participants will learn the basics to help them:

Helen Milner, Chief Executive of the Tinder Foundation, said: “With 9.5m people in the UK without basic online skills, it is fantastic to see such a commitment from Argos to support people in improving their skills during Get Online Week. These events are just some of the thousands happening within communities all over the country where people can find ongoing support to improve their digital skills.”

About Argos:
Argos is a leading UK digital retailer, offering around 43,000 products through www.argos.co.uk, its growing mobile channels, stores and over the telephone.

Argos continues to be the UK’s largest high street retailer online with around 123m customer transactions a year through its stores and 738 million website and app visits in the 12 months to February 2014. Customers can take advantage of Argos’ convenient Check & Reserve service available through its network of 734 stores across the UK and Republic of Ireland.

In the financial year to February 2014, Argos sales were £4.1 billion and it employed some 29,000 people across the business.

About Go ON UK:
Go ON UK is a digital skills charity established in 2012 to encourage and support individuals, business and charities to enjoy the benefits of being online. Go ON UK has nine chief executives around its boardroom table – Age UK, Argos, BBC, Big Lottery Fund, E.ON, EE, Lloyds Banking Group, Post Office and TalkTalk. Together, Go ON UK’s vision is to make the UK the world’s most digitally skilled nation. 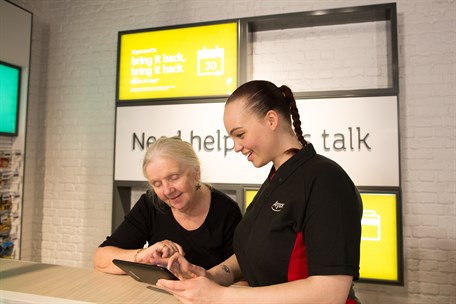 Argos partners with digital skills charity Go ON UK to provide practical skills, access and technology to some of the 9.5 million Brits still not online