Washington, DC, 2014-10-22— /EPR Retail News/ — A 12-year-old aspiring inventor created a desk fan for his mom with parts from a broken PC and a cardboard box. Adding a single-throw switch, and wires for the circuit, the fan came alive. Beaming with pride, the boy started his own fan project with a completed prototype and has plans to design a custom enclosure using a 3D printer and a program called Tinkercad.

Believe it or not, he brainstormed and executed his fan project within the walls of the Best Buy Teen Tech Center in Minneapolis.

In a world where technology and media continue to be more ingrained in everyday life interactions and career choices, it’s important to prepare students like this young inventor for future career success. That’s where the Teen Tech Centers come in. With existing centers already inspiring and training kids in Minneapolis, Chicago, Miami and San Antonio, this month Best Buy has opened additional centers in Seattle, Jersey City, New Jersey, and Washington, D.C. And on Oct. 22, the eighth center will open in Denver.

Housing state-of-the-art technology, Best Buy Teen Tech Centers are free after-school programs where teens can play, discover and learn about a variety of topics including graphic design, digital photography, audio and video production, game and app development, film-making and much more. Teens can also attend workshops led by Geek Squad Agents and other experts in technology, giving teens the opportunity to express themselves in an online global environment. The centers continue to lead the way when it comes to helping teens develop 21st century skills by giving them access to technology in a hands-on environment.

Best Buy CEO and President Hubert Joly spoke to a packed room of teens and local leaders at the opening of the Teen Tech Center at the Washington, D.C. Boys and Girls Club earlier this month. Alongside Joly was Housing and Urban Development Secretary Julián Castro, who shared his experience growing up in Texas as a member of the Boys and Girls Club. Castro said the partnership between Best Buy and the Boys and Girls Clubs is a great example of what can be accomplished when organizations work together.

Aaron Lundholm, coordinator of the Hennepin County Library-Minneapolis Central location, said the centers invite teens to get involved in creating information and media rather than just consuming it.

“They are learning by designing and in the context of projects they are interested in and care about,” he said. “They’re building 21st-century skills and fluency with technology in a hands-on way.”

The presence of the Hennepin County Library center (in Minneapolis) has been significant within the local community.

“Many of the young people we serve don’t otherwise have access to the powerful tools and support the center provides,” Lundholm said. “We’ve been successful in reaching ‘at risk’ youth who haven’t had access and opportunities like this before. Several of the teens are homeless and many (or most) are not in a position to afford hardware or software they find in the center.” 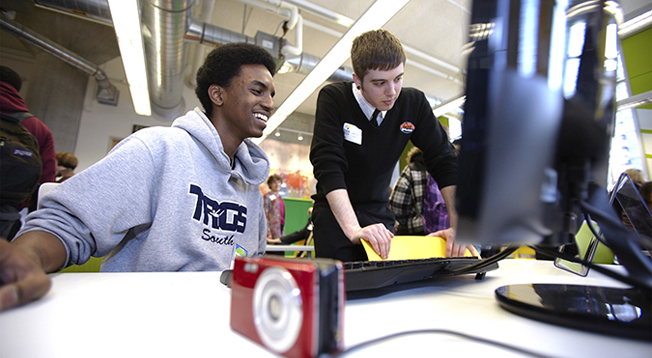