FCL is a unique multi-billion dollar wholesaling, manufacturing, marketing and administrative co-operative that is owned by 220 autonomous retail co-operatives in Western Canada. It is the largest company in Saskatchewan and the 45th largest in Canada, with sales of $9.4 billion in 2013.

“Federated Co-operatives Limited is proud to operate from our home location in Saskatoon, creating good jobs and making sustainable investments for Saskatoon, Saskatchewan and all of Western Canada,” says FCL CEO Scott Banda.

“Good things are happening every day in our organization as we continue growing and evolving to serve our retail co-ops, customers and communities better. Purchasing a second Home Office building is a testament to the enduring strength of the co-operative business model, the success of retail co-operatives and the support from the 1.6 million members and customers who shop co-op. Together we continue growing the economy here at home, something we have been doing for 86 years.”

FCL employs almost 900 people at its Saskatoon-based operations with an annual payroll of $60 million. Almost 600 work out of the company’s current nine-storey Home Office building located at 22nd Street East. It has about 95,000 square feet of office space and opened in 1969. Five years ago, 463 people worked at this location.

The newly-purchased building is a seven-storey building with approximately 84,000 square feet of office space. Approximately 40 employees recently relocated there, occupying a half floor. They will be joined by additional colleagues in the coming year as another floor is renovated. The remaining office space is leased to other tenants with varying terms and renewals. The new acquisition increases FCL’s ownership of total available downtown office space to just over eight per cent.

In addition to its Saskatoon-based operations, FCL employs another 2,400 people across Western Canada at five regional offices, various warehouse distribution centres, corporate bulk fuel/propane locations, feed mills and at its wholly-owned subsidiaries the Co-op Refinery Complex in Regina and The Grocery People in Edmonton.

Over the past 10 years, FCL has provided a patronage allocation of $4.1 billion to the retail co-operatives that own FCL; those retail co-ops in turn reinvest in their local communities through investment in new facilities and through returns to their individual members in the form of cash back and equity. In addition, FCL donates millions of dollars annually to charities and non-profit organizations that enhance the lives of individuals and communities across Western Canada. 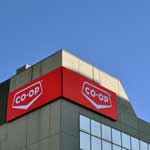