Globally, property sales revenue surged 33% (32% in local currency) during the quarter, with significant increases across all three global regions. Notably, U.S. property sales improved 31% as CBRE executed several large single-asset and portfolio sales during the quarter, including One Wall Street for Bank of New York Mellon and a $1.8 billion multifamily portfolio for DRA Advisors and Bell Partners Corporation. Strong capital flows into commercial real estate – coupled with the continued availability of debt capital – led to a 41% increase (40% in local currency) in commercial mortgage services revenue.

Large occupiers continue to demonstrate a strong appetite for integrated real estate services.  CBRE is well placed to capitalize on this ongoing trend, as reflected in 26 new outsourcing contracts signed during the third quarter. Global occupier outsourcing revenue improved 18% on an organic basis during the quarter. With contributions from the Norland acquisition, global revenue from this business line rose 61%.

Property leasing revenue improved by double digits for the fifth consecutive quarter, rising by 15% (14% in local currency). Growth was paced by an 18% increase (18% in local currency) in the Americas, where CBRE continues to make strong market share gains.

Global Investment Management revenue declined during the quarter, primarily due to last year’s third quarter including nearly $30 million of carried-interest revenue, which did not recur in this year’s period.  Otherwise, revenue in this segment would have increased 7% (5% in local currency).  Carried interest is incremental revenue that CBRE earns when it sells assets within portfolios it manages for institutional investors at values that exceed specified return thresholds. The timing of such sales is determined by the macro market environment and fund lifecycles. Capital raising activity in Global Investment Management remained strong with $9.1 billion of new commitments over the past 12 months.

During the third quarter, CBRE issued $300 million of 5.25% senior notes due 2025 and on October 27, 2014, CBRE used the note proceeds, together with cash on hand and borrowing under our revolving credit facility, to redeem in full its 6.625% senior notes due 2020 ($350 million aggregate principal amount).  These actions will lower CBRE’s annual interest expense by approximately $5 million and will extend debt maturity on $300 million of its senior unsecured debt by 4-1/2 years at an attractive, fixed interest rate.

Business Outlook
“We enter the final months of 2014 with strong momentum across our business lines,” said Mr. Sulentic. “Underlying fundamentals continue to improve and market sentiment remains positive.  We continue to execute our strategy by investing in our people and platform to create value for our clients and to extend our competitive advantage in the marketplace.”

With two months left in 2014, CBRE’s full-year performance is coming into sharper focus.  Therefore, the company is raising its adjusted EPS guidance4 for the full year to a range of $1.65 to $1.70.  CBRE is taking this action while being mindful of the slowing economic growth outside the U.S. and the challenging earnings comparison the company faces in the fourth quarter.  CBRE generated approximately $58 million of EBITDA from carried interest in the fourth quarter of 2013.

Conference Call Details
The company’s third-quarter earnings conference call will be held today (Wednesday, October 29, 2014) at 5:00 p.m. Eastern Time.  A webcast will be accessible through the Investor Relations section of the company’s website at www.cbre.com/investorrelations.

Note: This release contains forward-looking statements within the meaning of the ”safe harbor” provisions of the Private Securities Litigation Reform Act of 1995, including statements regarding our future growth momentum, operations, financial performance and business outlook.  These forward-looking statements involve known and unknown risks, uncertainties and other factors that may cause the Company’s actual results and performance in future periods to be materially different from any future results or performance suggested in forward-looking statements in this release.  Any forward-looking statements speak only as of the date of this release and, except to the extent required by applicable securities laws, the Company expressly disclaims any obligation to update or revise any of them to reflect actual results, any changes in expectations or any change in events.  If the Company does update one or more forward-looking statements, no inference should be drawn that it will make additional updates with respect to those or other forward-looking statements.  Factors that could cause results to differ materially include, but are not limited to: disruptions in general economic and business conditions, particularly in geographies where our business may be concentrated; volatility and disruption of the securities, capital and credit markets; interest rate increases; the cost and availability of capital for investment in real estate; clients’ willingness to make real estate or long-term contractual commitments and other factors affecting the value of real estate assets, inside and outside the United States; our ability to control costs relative to revenue growth; our ability to retain and incentivize producers; our ability to identify, acquire and integrate synergistic and accretive businesses; costs and potential future capital requirements relating to businesses we may acquire; integration challenges arising out of companies we may acquire; continued high levels of, or increases in, unemployment and general slowdowns in commercial activity; variations in historically customary seasonal patterns that cause our business not to perform as expected; trends in pricing and risk assumption for commercial real estate services; our ability to diversify our revenue model to offset cyclical economic trends in the commercial real estate industry; foreign currency fluctuations; our ability to attract new user and investor clients; our ability to retain major clients and renew related contracts; a reduction by companies in their reliance on outsourcing for their commercial real estate needs, which would affect our revenues and operating performance; client actions to restrain project spending and reduce outsourced staffing levels; changes in tax laws in the United States or in other jurisdictions in which our business may be concentrated that reduce or eliminate deductions or other tax benefits we receive; changes in international law (including anti-corruption, anti-money laundering and trade control law), particularly in Russia, Eastern Europe and the Middle East, due to the rising level of political instability in those regions; our ability to maintain our effective tax rate at or below current levels; our ability to compete globally, or in specific geographic markets or business segments that are material to us; our ability to leverage our global services platform to maximize and sustain long-term cash flow; our ability to maintain EBITDA margins that enable us to continue investing in our platform and client service offerings; our exposure to liabilities in connection with real estate advisory and property management activities and our ability to procure sufficient insurance coverage on acceptable terms; declines in lending activity of Government Sponsored Enterprises, regulatory oversight of such activity and our mortgage servicing revenue from the U.S. commercial real estate mortgage market; our ability to manage fluctuations in net earnings and cash flow, which could result from poor performance in our investment programs, including our participation as a principal in real estate investments; the ability of our Global Investment Management business to maintain and grow assets under management and achieve desired investment returns for our investors, and any potential related litigation, liabilities or reputational harm possible if we fail to do so; our ability to comply with laws and regulations related to our global operations, including real estate licensure, labor and employment laws and regulations, as well as the anti-corruption laws of the U.S. and other countries; our leverage and our ability to perform under our credit facilities; liabilities under guarantees, or for construction defects, that we incur in our Development Services business; the ability of CBRE Capital Markets to periodically amend, or replace, on satisfactory terms, the agreements for its warehouse lines of credit; the effect of significant movements in average cap rates across different property types; and the effect of implementation of new accounting rules and standards.

3 EBITDA represents earnings before net interest expense, write-off of financing costs, income taxes, depreciation and amortization, while amounts shown for EBITDA, as adjusted (or normalized EBITDA), remove the impact of certain cash and non-cash charges related to acquisitions and certain carried interest incentive compensation (reversal) expense.  Our management believes that both of these measures are useful in evaluating our operating performance compared to that of other companies in our industry because the calculations of EBITDA and EBITDA, as adjusted, generally eliminate the effects of financing and income taxes and the accounting effects of capital spending and acquisitions, which would include impairment charges of goodwill and intangibles created from acquisitions. Such items may vary for different companies for reasons unrelated to overall operating performance.  As a result, our management uses these measures to evaluate operating performance and for other discretionary purposes, including as a significant component when measuring our operating performance under our employee incentive programs. Additionally, we believe EBITDA and EBITDA, as adjusted, are useful to investors to assist them in getting a more complete picture of our results from operations.

For a reconciliation of EBITDA and EBITDA, as adjusted, to net income attributable to CBRE Group, Inc., the most comparable financial measure calculated and presented in accordance with GAAP, see the section of this press release titled “Non-GAAP Financial Measures.”

4 We have not reconciled the non-GAAP earnings per share guidance included in this release to the most directly comparable GAAP measure because this cannot be done without unreasonable effort. 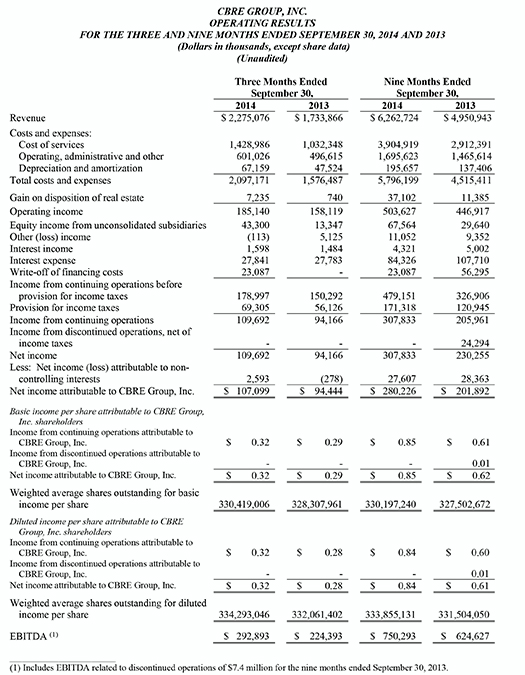 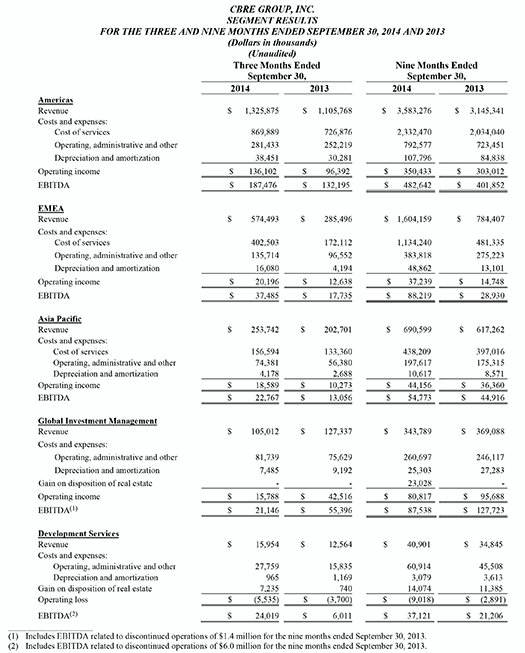 (i) Net income attributable to CBRE Group, Inc., as adjusted for selected items

(iii) EBITDA and EBITDA, as adjusted for selected items

The Company believes that these non-GAAP financial measures provide a more complete understanding of ongoing operations and enhance comparability of current results to prior periods as well as presenting the effects of selected charges in all periods presented.  The Company believes that investors may find it useful to see these non-GAAP financial measures to analyze financial performance without the impact of selected charges that may obscure trends in the underlying performance of its business. 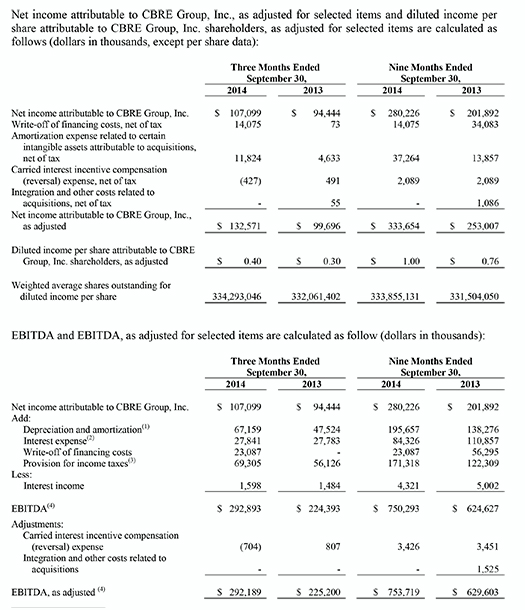 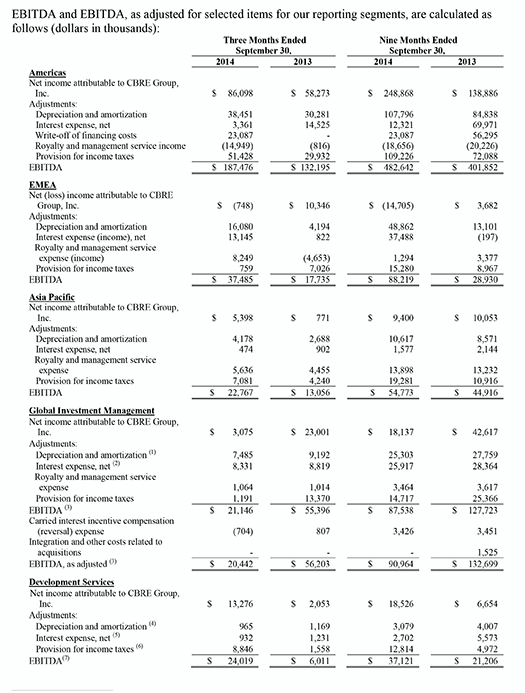 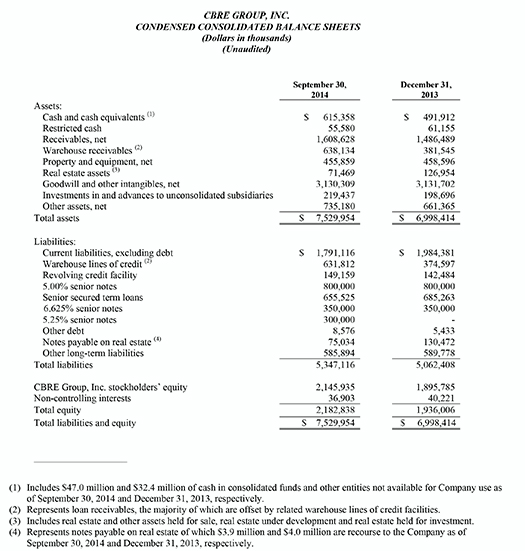