ALEXANDRIA, VA, 2015-5-13 — /EPR Retail News/ — Nearly nine in 10 consumers (85%) say that gas prices affect their feelings about the economy, according to survey results released by the National Association of Convenience Stores (NACS).  Gas prices have risen roughly 50 cents per gallon since February.

One in 10 consumers (10%) say that they will drive less over the next 30 days, a time when driving traditionally increases with the unofficial start of the summer drive season.

On average, consumers say they would reduce how much they drive if gas prices rise another $1.02, to $3.61 per gallon.  The $1.02 gap between current prices and the price at which consumers would change their behavior is the lowest recorded this year.

Consumers say that they have noticed rising gas prices. Seven in ten (70%) say gas prices today are higher than they were 30 days ago, which is nearly double the proportion that said so last month (38%). Similarly, seven in ten (72%) consumers expect gas prices to continue to rise over the next 30 days, a significant change compared to April (49%).

Nationwide, economic optimism fell from 52% to 48%. Gas prices had an even bigger impact on optimism in western states such as California where gas prices are averaging up to $1 per gallon more than the national average. Optimism in the West fell from 58% to 47% over the past month and trailed national optimism for the first time since August 2014. And consumers in the West do not expect the situation to get better soon: Nearly four in five (79%) consumers there expect prices to increase this month.

“While optimism over the economy declined, it is still significantly higher than this time last year when it was only 41%. And because the spring switchover to summer-blend fuel is nearly complete, many analysts suggest that prices will soon moderate,” said Jeff Lenard, NACS vice president of strategic industry initiatives. “Fuels retailers are certainly optimistic: 86% of our members say that they are optimistic about their business in the second quarter.

NACS, which represents the convenience store industry that sells 80% of the gas sold in the country, conducts the monthly consumer sentiment survey to gauge how gas prices affect broader economic trends. The NACS survey was conducted by Penn, Schoen and Berland Associates LLC; 1,105 gas consumers were surveyed May 5-7, 2015. Summary results are available at www.nacsonline.com/gasprices. 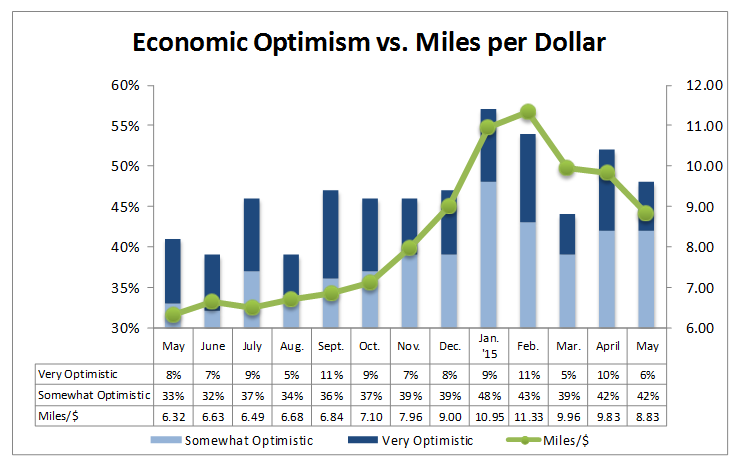