SEATTLE, 2015-9-8 — /EPR Retail News/ —  For the third season, Starbucks and the Seattle Seahawks are teaming up to offer a limited-edition gift card.

This year’s design features the sleek outline of the Seahawks logo on a navy blue card, accented by the familiar number 12 and Starbucks siren on a neon green background that surrounds the edge of the card. The co-branded card will be available beginning September 8 in participating Starbucks® stores throughout Washington state. Previous editions of the cards have become collector’s items.

New this year, participating Starbucks stores in Western Washington are featuring co-branded cup sleeves, while supplies last. The hot-beverage sleeves include details on how to access exclusive team news through the Seahawks Snapchat channel.

Starbucks and the Seahawks are committed to building safer, stronger neighborhoods in the Seattle area through initiatives like A Better Seattle (ABS). Founded by Seahawks Coach Pete Carroll in partnership with the YMCA’s Alive & Free program, ABS helps young people become engaged members of their communities with support from outreach workers. Over the past two years, Starbucks and its customers have contributed more than $125,000 to ABS.

To raise awareness of the work A Better Seattle does in the region, a select group of Seahawks players will be “guest baristas” at Seattle-area Starbucks stores. (The event date and locations will be announced later this month). They’ll serve customers and fans and share their commitment to helping local youth succeed.

This year’s limited-edition card requires a minimum $15 load which can be used toward purchase in any Starbucks store.

For more than 44 years, Starbucks has called Seattle home. Starbucks continues to celebrate the community at its SoDo headquarters, roasting plant in Kent, Starbucks Reserve Roastery and Tasting Room in Seattle, and in stores throughout Washington. Starbucks is proud to support local initiatives through partnerships with like-minded local organizations including the Seattle Seahawks, Seattle Sounders FC, University of Washington, Seattle Theatre Group, Seafair, Bumbershoot, and the Seattle International Film Festival. Learn more at starbucks.com/seattle. 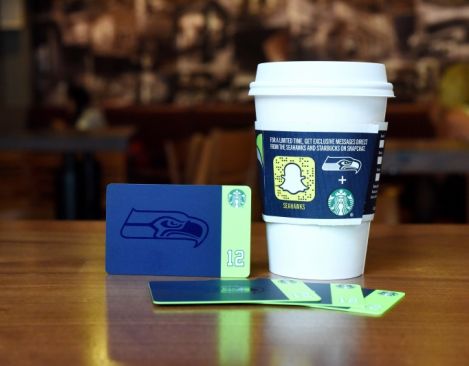