Interviews are available.  Live shots are welcomed!
Monday, Oct. 5, Washington Redskins nose tackle Terrance Knighton will team up with Harris Teeter to debut his personally designed Signature Sub Sandwich which is guaranteed to fill even the largest appetite.

Knighton’s sandwich “The Capital Roast” is a must-try for Harris Teeter shoppers. For only $3.99, fans can satisfy their appetite with “The Capital Roast” which features roasted chicken, pepperoni and bacon topped with cheddar cheese, lettuce, pickles, oil, vinegar, ranch dressing and a dash of Salt and Pepper on a white flour tortilla. Shoppers can make it a lunch pack for only $4.49. The lunch pack includes “The Capital Roast” sandwich and your choice of one chocolate chunk, macadamia nut, oatmeal raisin or cranberry nut cookie.

“The Capital Roast” will be available in the Fresh Foods Market Sandwich Shop in all Washington-area Harris Teeter stores.  Monday only, however, Knighton will make an appearance at the Spectrum Center Harris Teeter to personally introduce shoppers and fans to his Signature Sub Sandwich.  He will also be signing autographs. 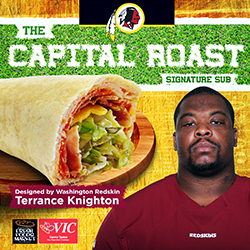