POLAND, 2015-9-22 — /EPR Retail News/ — The French Touch campaign is an initiative designed to promote France and French products in Poland. It will run from 23 September to 10 October 2015.

Carrefour Poland is serving as one of the campaign’s strategic partners and so will be organising a number of commercial events across all of its hypermarkets.

The purpose the campaign is to use cultural, touristic and commercial means to showcase France. Throughout the period, France and its products will be on show throughout Poland in many of its shopping centres. The highlights of France’s regions will be showcased, the aim being to show Polish people the richness and beauty of what they have to offer to visitors and make them want to find out more.

During the weeks of the “French Touch campaign” French product enthusiasts will be able to pick up a special passport from a number of outlets in Warsaw and other major towns and cities throughout Poland (as well as over the Internet). It will feature some very enticing commercial offerings so that they can purchase French products at attractive prices. 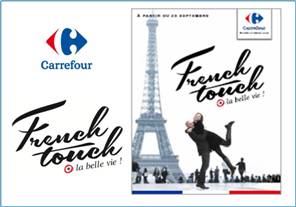