Opening of Starbucks Fashion Arena in Prague on 16th October, 2015 marked an important milestone of reaching 100 Starbucks coffee shops in AmRest portfolio. Company continues the strategy of dynamic development of this brand in Central Europe, bringing the best coffee experience to its Customers. History of Starbucks presence in this region reaches back to 2008, when the first Starbucks coffee shop was introduced to the Czech market, in Lesser Town Square, Prague under a joint venture agreement with Starbucks Coffee International. With the recent opening, AmRest now operates 24 Starbucks locations in the Czech Republic.

At the same time, opening of new Starbucks in Prague’s Fashion Arena increased total number of AmRest stores in the Czech Republic to 100, strengthening the leadership position of the Company in Central Europe. In addition to Starbucks, AmRest’s portfolio in Czech Republic consists of two other world class brands: KFC (69 locations) and Burger King (7 locations).

Adam Mularuk, Starbucks President for Central Europe at AmRest, comments: “We are happy to be a part of the growing economy of the Czech Republic. Our brands have many loyal fans here. Today, when we have reached a milestone number of 100 locations in the country, we want to thank our customers for their trust and engagement. We also want to express gratitude to our Partners in the Czech Republic. It is due to their effort and commitment, showed every day through AmRest “Anything is possible” culture, that we have been able to build such a strong foundation for our business in this country”.

AmRest is a fast growing global restaurant operator present in 12 countries, with a diversified portfolio of both franchised brands (KFC, Pizza Hut, Starbucks, Burger King) and unique proprietary chains such as La Tagliatella, Blue Frog and Kabb. The lion’s share of its business is concentrated in Central Europe and Spain. 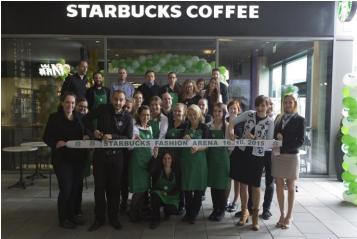