Howard Schultz walked cobblestone streets of Milan for the first time in 1983 as the marketing director of Starbucks, which then sold whole-bean coffee from a handful of stores in Seattle. Schultz went to Italy to represent the company at an international trade show. He returned with an idea that would change the trajectory of Starbucks Coffee Company.

“The Italians had created the theater, romance, art and magic of experiencing espresso,” Schultz recalled. “I was overwhelmed with a gut instinct that this is what we should be doing.”

As Starbucks announces its will open in Italy in early 2017, Schultz shares the story of how the company’s history is directly linked to Milan, Verona and Italian espresso bar traditions.

“Everything we’ve done to date sits on the foundation of wonderful experiences that many of us have had in Italy,” he said.

The Symphony of an Italian Coffee House

The 1983 trade show was unremarkable. Schultz, however, found his daily walks to and from the event to be life changing as he visited several espresso bars along the way.

Schultz found a full-sensory experience greeted customers who stepped through the doorways of Milan coffee houses. Italian opera played as baristas ground coffee, steamed milk and pulled espresso shots in graceful, powerful motions as if they were conducting an orchestra. He noticed the baristas were celebrated professionals who seemed to know each customer they served.

“In each shop I visited I began to see the same people and interactions, and it dawned on me that what these coffee bars had created, aside from the romance and theater of coffee, was a morning ritual and a sense of community,” said Schultz.

On a day trip to Verona, he observed the coffee shops there were enhanced by Italian craftsmanship. Every detail of preparation and presentation was treated with reverence.

“I left Italy absolutely energized by the culture,” Schultz said. “I couldn’t wait to sit down with the two remaining founders of Starbucks and tell them, ‘We’ve got to do this.’”

Back at home in Seattle, Schultz’s enthusiasm was met with little more than a yawn from the company’s leaders, who said they’d been to Italy and the espresso bars there were “not what Americans wanted.” Their indifference turned to annoyance as they told a persistent Schultz they didn’t want to be in the restaurant business. Next came flat out resistance as they said no to all his suggestions.

Schultz said leaders at the time were stubborn, but so was he.

Unwilling to drop the idea of bringing the first espresso bar to Seattle, Schultz convinced Starbucks founders to test the coffeehouse concept a year later. He asked for half of a new 1,500 square-foot store that was opening in downtown Seattle. Instead he got about 300 square feet. Schultz crammed equipment and a small counter into the space and began serving espresso when the store opened on a rainy morning in April 1984. Initially there wasn’t even a sign in the window.

Starbucks stores at the time were serving about 200 customers on a good day. The new store – with a coffee bar – served about 1,000 people a day.  Though it was a success with customers who tasted a caffé latte for the first time, Schultz was dealt a “crushing blow” when the owners said they had no plans to repeat the coffee shop experiment. It was considered a distraction from the company’s core business of selling high-quality arabica coffee beans.

Undeterred, Schultz returned to Italy to immerse himself in their coffee culture. Later he decided to leave Starbucks to form his own Italian-inspired coffee business, which he named for a Milan newspaper – Il Giornale. Starbucks invested in the Schultz start up and the first Il Giornale coffeehouse opened in 1986, offering brewed coffee and espresso beverages made from Starbucks beans.

Financial troubles at Starbucks bubbled to the surface around that time. Starbucks was trying to manage two brands – its own and Peet’s Coffee & Tea, which it had acquired in 1984. Starbucks founder Jerry Baldwin told Schultz he couldn’t keep running both companies and wanted to return to San Francisco to focus on Peet’s.

“He told me, ‘I’m going to sell Starbucks and the right person to buy it is you. I know you don’t have any money. I’ll give you 60 to 90 days to find the money,’” recalled Schultz. The acquisition price was $3.8 million. Schultz said it was “quite difficult,” but he raised the money and acquired Starbucks assets in 1987.

Job one was changing the name of Il Giornale to Starbucks Corporation. Next came putting coffee bars in every store, as Schultz wanted to do five years earlier. Starbucks also expanded with stores in Chicago and Vancouver, Canada.

“We began to elevate the romance and theater of the beverage, integrated with the merchandising and storytelling of roasting and selling whole bean coffee,” he said. “It’s all steeped in that trip to Italy in 1983. Everything is about that.”

Schultz has returned to Italy once a year over the past 30 years. Although he doesn’t speak Italian, Schultz feels comfortable there and admires the quality and artistry of Italian products.

“The dream of the company always has been to sometime complete the circle and open in Italy, but we haven’t been ready,” said Schultz, who feels “intuitively” that the time is now right.

The Starbucks chairman and ceo is following the same instinct he felt initially when he walked the streets of Milan and marveled at the experience baristas created for their customers and communities.

Starbucks will enter Italy with “tremendous humility and great respect for the culture,” Schultz added, with the support of its business partner, Percassi – a well-respected and prominent Italian company with a proven track record for operating major brand partnerships across Italy. Percassi shares Starbucks passion for the history and cultural heritage of the country.

“We know that we are going to face a unique challenge with the opening of the first Starbucks store in Italy, the country of coffee, and we are confident that Italian people are ready to live the Starbucks experience, as already occurs in many other markets,” said Antonio Percassi, President of the company Percassi.

Starbucks doesn’t have real estate selected its first location in Italy, but Schultz has an image of the store in his mind.

“We have to deliver a stunning visual experience that is only topped off by the quality of the coffee and what it tastes like,” he said. “Visually, it has to be a very seductive place where Starbucks comes alive.”

The store will be designed with “painstaking attention to detail,” honoring the Italian people and their coffee culture.

Partners (employees) in the store will carry on a tradition of coffee theater and artistry, combining the emotion of Schultz’s first experience in Milan with the exceptional service visible in more than 23,000 Starbucks stores around the globe – from the first store in Pike Place Market to the grand, immersive experience of the Starbucks Reserve Roastery and Tasting Room in Seattle.

“It seems like yesterday I was walking those streets, and here we are,” said Schultz. “I want partners to be extraordinarily proud that we’re going back to the source where it all began, and we’re going to do it in a way that brings every aspect of the Starbucks Experience to life in Italy.”

Press Release: With Humility and Respect, Starbucks Turns its Eye Toward Italy

1. Howard Schultz, chairman and ceo Starbucks Coffee Company, visited the historic Duomo cathedral in Milan, Italy this week as he announces the brand’s intention to open its first Italian store in 2017.

2. Howard Schultz, chairman and ceo Starbucks Coffee Company, announces to Milanese artisans, entrepreneurs and business leaders his intention to open a store in Milan, Italy in 2017.

3. Howard Schultz, chairman and ceo Starbucks Coffee Company, stands in the center of Galleria Vittorio Emanuele II, one of the world’s oldest shopping malls, in Milan, Italy as he announces that Starbucks will open its first store in the country in 2017. 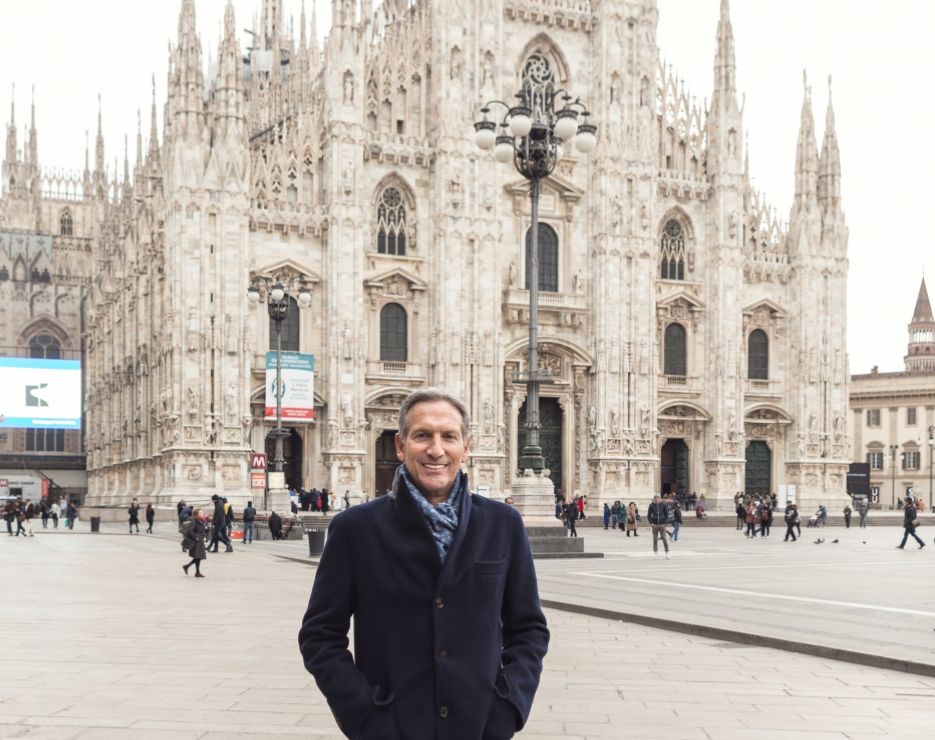