Auckland, New Zealand, 2016-Oct-11 — /EPR Retail News/ — Meat-lovers have long known that the choicest cuts are served at New World and PAK’nSAVE – and now there’s proof their spring lamb is a cut above the rest.

Coastal Spring Lamb, which is sold exclusively in supermarkets by Foodstuffs, has just been named a finalist in not one but four categories of the 2016 NZ Food Awards.

The company, which sells lamb grown by family farms on the east and west coasts of the lower North Island, is a finalist in the Primary Sector Product Award, which is open to all primary sector food and beverage producers; the Chilled Short Shelf Life Award, for food produced by companies with at least $3 million turnover; the Business Innovation Award, and the Export Innovation Award.

Coastal Spring Lamb founder Richard Redmayne says to be a finalist in all of the four categories they entered is very exciting for their family business.

“We’re particularly happy for our farmers, who are out in all weather, weeks on end, producing the best lamb in the world – usually without recognition. This gives them that recognition.”

“We’re also delighted because our fellow finalists include much larger companies, and it proves that it is possible for a niche business to produce some of the best food in New Zealand.”

This coming spring lamb season, from October to January, their meat will be available at New Worlds around the country, PAK’nSAVE in the South Island and selected Four Square stores.

“Their meat is superb,” says Kelly, “and our customers clearly agree. Last season’s product was quickly snapped up, and I’m sure that will be repeated when we start selling it again in October.”

Redmayne says partnering with Foodstuffs has given his company the confidence to grow.

“Foodstuffs is focused on great service, exceptional food, and enduring relationships with their customers, and these are values that match ours exactly. We’ve been able to meet individual store owners and their in-store master butchers, and share our story with them, which means, together, we can provide a product with real provenance – from our families direct to their shoppers.”

“We recently returned from a month in Asia, where we met with 74 executive chefs from 5 and 6-star hotels and resorts. These are chefs who can source the best food in the world, but aren’t used to meeting the actual farmer! The fact they’re choosing to use our meat is very humbling.” 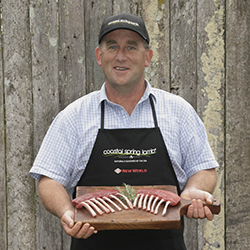