London, 2016-Oct-29 — /EPR Retail News/ — Waitrose is recruiting over 5,000 people for temporary roles across the country this Christmas to help with increased demand over the busy festive period.

New recruits will make up around 2,500 of these roles and they will be filled throughout October, November and December. The remaining roles will be filled by those who have worked for the retailer previously with many being university students home for the Christmas holidays.

The full-time and part-time positions cover a variety of roles throughout the business, including Waitrose branches and little Waitrose convenience shops.

Helen Hyde, Waitrose Personnel Director, said: ‘We are committed to offering the best customer service during the festive season so we are happy to welcome people who wish to work in our fast-paced and friendly business. As we approach our busiest time of the year the creation of thousands of varied seasonal roles will help enable us to provide our famous high-quality service for busy Christmas shoppers.’

Those interested in applying can check www.jlpjobs.com throughout the run-up to Christmas to see the advertised vacancies on offer.

Waitrose – winner of the Best Supermarket1 and Best Food Retailer2 awards- currently has 350 shops in England, Scotland, Wales and the Channel Islands, including 61 convenience branches, and another 27 shops at Welcome Break locations. It combines the convenience of a supermarket with the expertise and service of a specialist shop – dedicated to offering quality food that has been responsibly sourced, combined with high standards of customer service.  Waitrose also exports its products to 58 countries worldwide and has seven shops which operate under licence in the Middle East. Waitrose’s omnichannel business includes the online grocery service Waitrose.com, as well as specialist online shops including waitrosecellar.com for wine and waitrosekitchen.com for cookware, utensils and kithchen gadgets.

SPAIN, 2016-Jun-24 — /EPR Retail News/ — Carrefour increases its workforce by taking on 6,000 people to reinforce the peak working periods that occur during the summer. Ninety percent of those taken on will join hypermarket staff and the rest will fill positions in supermarkets and other company subsidiaries such as travel agencies, service stations and financial services. The profiles vary although the majority of applicants are young people looking for their first job and students.

The candidates selected must be clearly sales and customer oriented, and possess the capacity to work as part of a team. The profile of the people Carrefour is hiring is very varied, although young first-time job seekers predominate. Those interested can send their CVs via  www.carrefour.es/trabaja en carrefour  stating the cities and stores they are interested in.

The company plans to offer over 4,400 new long term contracts in 2016, confirming its place as a reference company in terms of job creation in Spain. Carrefour has over 46,000 employees under its banner in Spain.

In addition, its commitment to job creation, especially among young people, will continue to be one of the retail firm’s hallmarks during 2016. In 2015 alone, the company took on more than 400 university graduates and this year, it hopes to attract another 300, enabling them to pursue their careers with Carrefour as managers, middle managers or directors. For this purpose, the company has a number of agreements with universities throughout the country. Carrefour has also taken on over 60 young people with professional profiles relating to new technologies in response to the on-going digitization process. 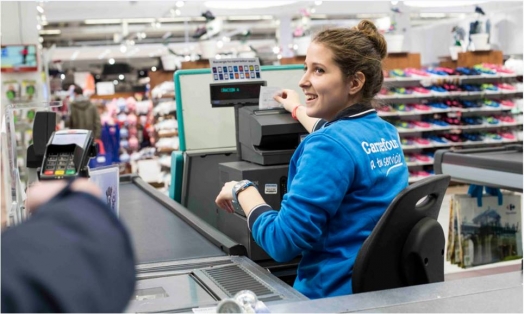 Carrefour to hire 6,000 people to reinforce the peak working periods this summer