Croix Cedex, France, 2016-Dec-15 — /EPR Retail News/ — With a surface area of 5,970 sqm, the new store proposes 23,400 food and non-food product assortments as well as the entire offering available on auchan.ru at a Click&Collect pick-up point.

Having opened its first Russian hypermarket in Mytischi in 2002, the Auchan Retail network now operates in more than 85 cities via its 3 formats (hypermarkets, supermarkets and convenience stores), and via e-shopping.

This inauguration in Moscow comes in the footsteps of the opening last week of Auchan’s 99th hypermarket in Tyumen in the Siberian Urals, and in advance of around ten new stores, all formats included, to be opened between now and the end of the year. 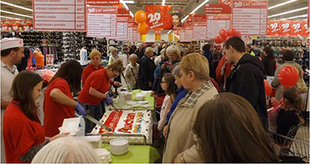