Boulogne-Billancourt, FRANCE, 2016-Jul-03 — /EPR Retail News/ — The 103rd Tour de France will run from 2 to 24 July, starting from Mont Saint-Michel. As has been the case every year for the past 23 years, Carrefour will be part of the event!

This year, the Tour de France, the world’s most famous cycle race, is celebrating its 103rd edition. The race will feature 21 stages, will cover total distance of 3519 km and will pass through three bordering countries: Spain, Andorra and Switzerland. For the 2016 edition, Carrefour will be generating a great deal of Tour-related buzz in its hypermarkets, supermarkets and convenience stores.

Back into the saddle for the Tour de France with Carrefour!
Just like for previous editions, Carrefour will be out on the Tour de France 2016’s route, setting up 19 regional villages in hypermarket car parks, as well as organising numerous events in 34 Market stores.

As part of Carrefour’s support for the Tour, the general public will be able to enjoy a wide range of events in a fun and sporty atmosphere, inflatable games for children, table football, quizzes about partner brands, goodies being given out, etc. The Tour’s supporters will also get to watch the race on giant screens set up in each village.

The Tour’s Caravane: discovering France’s regions with Carrefour!
The Tour de France is also an opportunity to discover or rediscover the treasures of the regions through which the race passes. 9 vehicles, 6 of which will be decorated in the colours of Carrefour’s Dairy, Fruit and vegetables, Butchery and Fish Quality Lines, will wind their way along the route of the Tour, introducing the public to Carrefour’s local partner producers. These will be showcased by the caravan’s coordinator, as well as by videos shown on LED screens.

Every day, via a couple of delivery tricycles decked out in Carrefour Market colours, 700 kg of fruit brimming with vitamins will be given out to the general public at the start and finish lines.
A special “J’optimisme” event float will be bringing up the rear of the Carrefour caravan, spreading good cheer among the general public by giving out 400,000 baseball caps and 300,000 grocery bags.

Carrefour – supporting Mécénat Chirurgie Cardiaque on the Tour’s “Heart” stage!
Carrefour, alongside its well-established partner Mécénat Chirurgie Cardiaque, will be encouraging its employees to take part in the “Heart” stage from Bourg Saint Andéol to Caverne du Pont d’Arc, raising money to fund heart surgery for ill children. Since 2003, the Tour de France has helped save 239 children!

To keep up-to-date with what’s happening in the Tour de France, visit the website “le tour à pois”. You’ll find commentaries from experts like Richard Virenque and Jacky Durant, videos of the various stages and info about who’s wearing the polka-dot jersey – as well as an opportunity to play games throughout this year’s edition! 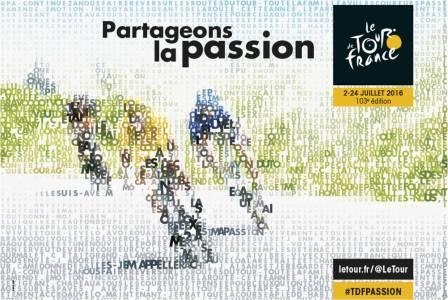 Carrefour again takes part in the 103rd Tour de France, from 2 to 24 July