MANCHESTER, England, 2015-10-20 — /EPR Retail News/ — With Halloween fast approaching, the Co-operative Food today, Tuesday, 20, October, reveals the results of research to find which is the best British apple for bobbing.

Commissioned by the community retailer, the study made a splash with students at the Co-operative Academy of Leeds who concluded that the Spartan apple pipped the Royal Gala (2nd) and Cox’s Orange Pippin (3rd) to be awarded the “best for bobbing” title.

Led by the Academy’s Head of Science, Christina McGhie, approaching 200 Year 8, 9, and 10 students got their teeth into a series of experiments designed to put popular British seasonal varieties to the test.

Students compared attributes considered core to bobbing performance by pressure testing the softness of the flesh and considering the size, shape, buoyancy, density and, stability of the fruit in the water.

The overall winner, Spartan – which was introduced into the UK in the mid-1930’s and whose sweet flavour makes it a popular choice as a cooking or dessert apple – will be displayed as “best for bobbing” in selected Co-operative food store’s across the UK.

Christina McGhie, Subject Leader for Science at the Co-operative Academy of Leeds, who supervised the research, said:

“The Academy was delighted to involve so many students in the study, they were intrigued by the science behind the research, the different techniques being employed and, that there are so many different types and flavour of British apple.

“There are pupils from around 80 different cultures and countries at the school, some who had never experienced the traditional game of apple bobbing, however all of them were enthralled by the study, taking into account all of the variables and declaring the Spartan to be best for bobbing.

“The day ended with pupils taking on the teachers in a game of apple bobbing and, in a reversal of the age-old tradition of pupils giving an apple to the teacher, The Co-op supplied enough fruit for the teachers to give all of our students an apple.”

“The meticulous way in which students at the Co-operative Academy of Leeds went about the research was fantastic. Bringing an Apple to school perhaps conjures up thoughts of technology among many pupils these days and, in an interesting twist, the Spartan is derived from the McIntosh apple.

“The Co-op works with growers and suppliers to ensure great tasting fresh produce in our stores and, with so many people enjoying apple bobbing at Hallowe’en, we were all keen to establish the best home-grown variety for this quintessentially British game.

“Various techniques were displayed, making waves in the bowl and pushing the apple to edge of the water however, it was found that the key to apple bobbing success lies with the choice of apple and with its soft flesh, medium size and buoyancy, the Spartan dessert apple enjoyed the sweet taste of victory.”

“This is a great initiative from The Co-op, the more we can engage and encourage young people, and consumers generally, to connect with healthy, fresh produce, the better. While there are many superb British varieties available at this time of the year – some old, some new – the Spartan has long been popular for bobbing. The findings reaffirm that the Spartan apple really is at its best around Hallowe’en with the combination of its sweet, clean and crisp taste and, just the right amount of juice, making it a popular choice.”

The Co-op has announced a £125M investment in quality, freshness and, lowering the price of everyday essentials – a move which has included pruning the price of over 100 lines of fresh fruit and vegetables and, the introduction of revolving offers on popular produce, called “fresh three”. 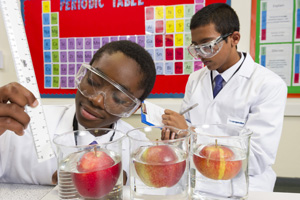 Halloween: Co-operative Food to find which is the best British apple for bobbing