Quotes:
“Paradies Lagardère has enjoyed a long-term partnership with the ACI-NA, and we’re honored to win three awards in the 2016 ACI-NA Excellence in Airport Concessions Awards program. This recognition is a testament to the hard work of our employees, who ensure we continue our industry-leading customer service, superior designs and award-winning store and restaurant operations,” said Gregg Paradies, president and CEO.

“I am thrilled, and I believe the pioneers who created Boise’s Greenbelt would be equally as pleased,” said Tia Crabtree, editor of The Boise Greenbelt Magazine. “The Greenbelt Magazine – It’s a Boise Thing concept captures the beauty of Boise and all its assets. Paradies Lagardère and CSDI Construction did a great job on the design at the Boise Airport.”

Additional Information:
The ACI-NA Excellence in Airport Concessions Awards provides the industry the opportunity to recognize success and innovation in commercial programs at airports of all sizes. Any ACI-NA member is eligible. Categories include Best Food & Beverage Program, Best New Retail Concept, Best “Green” Concession Practice or Concept Category, and Best New Consumer Services Concept. The ACI-NA represents local, regional, and state governing bodies that own and operate commercial airports in the U.S. and Canada. 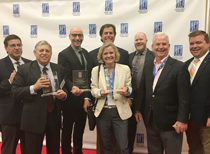