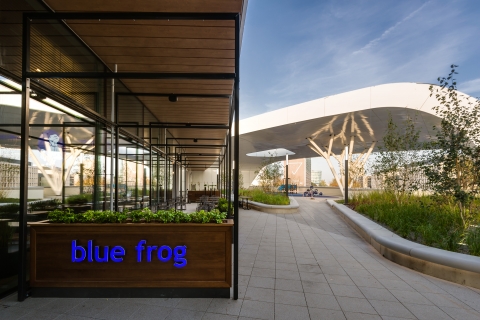 Wroclaw, Poland, 2017-Oct-25 — /EPR Retail News/ — AmRest Holdings SE („AmRest”) (WSE: EAT), the largest publicly listed restaurant operator in Central Europe announced an opening of the first blue frog restaurant in the Polish market. As a result, the Company expanded its operation in the Polish market, where already was present with five brands of Quick Service and Casual Dining Restaurants.

Blue frog is an unique concept of a casual dining restaurant with a wide bar offer. The restaurant offers dishes based on American cuisine enriched by distinct Asian influences. The bar in blue frog offers a wide selection of soft drinks and cocktails, prepared by professional bartenders. The combination of exquisite cuisine, relaxed atmosphere and friendly service is a recipe for success of the
brand.

Entering the polish market is a natural sequence of brand’s expansion in the world. The shape of Polish gastronomy market and customers’ openness to new concepts are creating a big chance for us to grow. We have five years of experience in running blue frog business in China and we hear positive opinions about blue frog in Spain, where we’ve just opened the first blue frog restaurant. We believe that the idea of contemporary American kitchen with Asian accents will meet customer’s expectations in Poland – said Sylweriusz Faruga, President of blue frog.

The first blue frog restaurant is located in a newly opened shopping mall Wroclavia in Wroclaw, Poland. The Company plans to develop the blue frog brand in the biggest polish cities.

Blue frog’s history within AmRest started in 2012, when the Company purchased a majority stake in Blue Horizon (running at that time 10 blue frog restaurants in China). Since 2012, AmRest has expanded the brand to over 40 new restaurants. In 2017 the Company begun an expansion of the brand in Europe. The first blue frog in the Old Continent was opened on September 18th in Parquesur, the largest shopping, leisure and catering center in the Community of Madrid and one of the largest in Spain. Poland is the second country in Europe where this unique brand debuts.

The newly opened blue frog restaurant in Poland marks another milestone in AmRest history, being the 1500th restaurant in the Company’s portfolio. 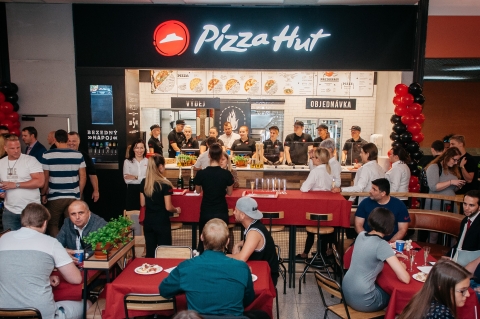 Wroclaw, Poland, 2017-Sep-06 — /EPR Retail News/ — AmRest Holdings SE („AmRest”) (WSE: EAT), the largest publicly listed restaurant operator in Central Europe, announced an opening of the first Pizza Hut restaurant in the Czech Republic. As a result, the Company expanded its operation in the market, where was already present with KFC, Starbucks and Burger King brands.

A newly-opened restaurant in Palladium Shopping mall in Prague represents Express concept which is a response to current market trends and consumer needs. The store offers the most popular pizzas from Pizza Hut’s menu made of the highest quality ingredients in front of the customer in only 5 minutes.

Entering the Czech market is a continuation of Pizza Hut development strategy in CE region. We are very excited to be launching this pioneering concept here. It has been very successful in both Poland and Hungary and we strongly believe that our best quality products and excellent service will meet customer’s expectations in Czech Republic in the same way – said Monika Czyż, President Pizza Hut Delivery & Express

By 2021, the Company plans to open 70 Pizza Hut restaurants in the Czech market, employing a total of 1,500 people.

AmRest history started in 1993 with the opening of first Pizza Hut restaurant in Wrocław Market Square. Currently, the Company operates 300 restaurants in 6 countries. Besides the Czech Republic, there is also Poland, Hungary, Russia, Germany and France. Starting from October 1st, 2016 the Company as a master-franchisee has the right to granting the license to the third parties to operate Pizza Hut Express and Pizza Hut Delivery restaurants (subfranchise) in Central and Eastern Europe countries.