In publishing these rankings HDH and ICSC’s aim is to provide a clear picture, based on rigorous analytical research, of the importance of different markets for both retailers and investors.

Jonathan De Mello, Head of Retail Consultancy at HDH comments, “This is the first European Retail Ranking of its kind and finally provides retailers with a means of assessing Europe’s true hierarchy of towns and cities. In order to produce a relative ranking of European town and city centers we have created a pan-European ‘gravity model’ – which calculates the amount of spend flowing to each – and have analyzed and ranked over 15,000 towns and cities across Europe. Gravity modeling calculates the distance an individual has to travel, the attractiveness of the retail offer within the town or city center – and competing centers – and takes into account the total amount of retail space, how that space is split across product categories and the presence of key footfall drivers. Our European gravity model is unique, and is calibrated by our knowledge of retailer and shopping center performance, given the location strategy projects we conduct for retailers on a global basis.”

According to HDH, the success of a town or city center depends on three major factors: residential catchment spend (local residents visiting as a shopping destination); worker spend (particularly important for convenience brands and caterers); and tourist spend (large numbers of wealthy tourists are a crucial factor in many European towns and cities).

Jonathan adds, “Residential catchment spend is calculated for each postal sector using mean income levels and consumer expenditure surveys. Tourist spend is calibrated based on the presence of accommodation and tourist attractions, and visitor numbers and the affluence of tourists is calculated by country of origin and the quality of accommodation. Worker spend is crucial as it is regular expenditure and is calculated on the presence of offices, along with average earnings for certain occupations in each city, which in turn influences likely spend.”

David Harper, CEO of Harper Dennis Hobbs adds, “Our partnership with ICSC in producing these rankings will ensure it becomes the principal medium for retailers to benchmark their portfolios and European expansion strategies going forward. We will produce these rankings annually to account for new retail development – which is particularly prevalent across Central and Eastern Europe – and changes in consumer spending.”

Mike Morrissey, ICSC Chief Global Co-Ordination Officer comments, “The top 10 towns and cities in Europe are those that have a strong residential, worker and tourist spend and include Rome, Munich, Milan, Moscow, Berlin, Zurich and Istanbul. There are some second city entries high up the table where tourism perhaps has a lesser impact, but which have strong retail cores with a wide choice of retail on offer, such as Glasgow and Hamburg.”

The rankings have been based on a 2km radius around the town or city center, which is thought to be the maximum distance shoppers are willing to walk on a single shopping trip. If a shopper can walk between multiple shopping centers and retail streets in a town or city center easily, they are more likely to base their trip on all retail available, not just a single street or shopping center. Any malls, streets or retail units within this radius are attributed to the ‘city center’ offer, whilst malls/retail parks outside this radius are treated as standalone centers.

Andrew Bathurst, who heads up HDH’s International Team comments, “This key new metric for the market will be attractive to retailers and investors alike, as it enables them to assess which towns and cities are the most influential and to compare different markets across Europe. Retailers make decisions to open in new locations based on a huge number of factors such as market size, quality of the retail, shopper profiles and neighboring retailers. This research will allow retailers and investors to compare the top 50 towns and cities using very detailed and mathematical criteria.”

The rankings have been calibrated not only through detailed mathematical research but are also based on HDH’s in-depth understanding of the European retail market, developed from HDH’s work across many different locations. By advising new entrants to Europe, such as American Eagle and J Crew, and established brands such as Estee Lauder, Louis Vuitton, Karen Millen and Oasis, HDH understands which locations are most important for global retailers and what factors influence retail spend.

The UK has the greatest number of towns and cities in the top 50 with 10 in total. However, whilst London West End leads the pack as the best city center in Europe, no other UK town or city makes the top 10. On the other hand, Germany – with 8 towns or cities in the top 50 – has two very strong cities in Munich (5th position) and Berlin (8th position). France (7 in the top 50) is similar to the UK, in that Paris dominates (2nd position in Europe overall) whilst Lyon and Marseilles don’t even figure in the top 20. Finally both Italy and Spain both have two very strong cities each with Rome (4th) and Milan (6th) and Madrid (3rd) and Barcelona (11th) respectively.

Looking east to Central and Eastern Europe, Moscow (7th), St Petersburg (22nd) and Warsaw (48th) all would be significantly higher up the rankings in this particular survey, were it not for the fact that there are significantly more out of town malls in/around their urban cores. Bucharest – which doesn’t make the top 50 – is the most extreme example of this, with limited retail within the city core, but some large and high quality out of town malls. The substantial volume of new mall development in the pipeline will also affect the findings going forward – particularly in Russia and Turkey – with many more malls planned or under construction in both markets over the next few years.

Number of Retail Centers in Top 50 by Country: 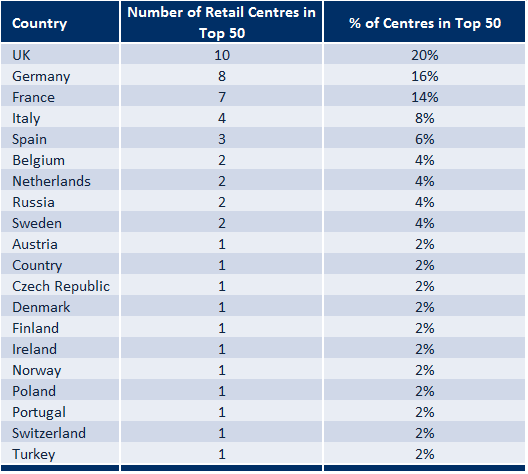