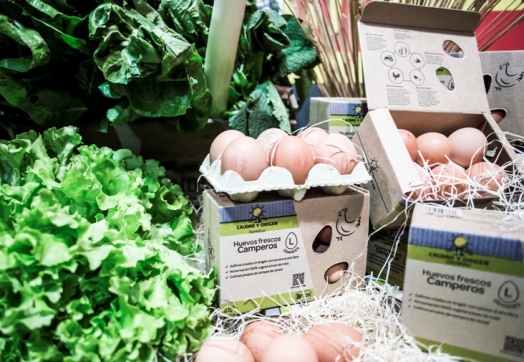 This is the first alliance entered into as part of the new Quality Line own brand plan. It was created by the retailer to recognise and promote national products that are committed to recovering foods’ original flavour and that take animal welfare and the environment into account, as well as acknowledging the work of crop and livestock farmers and fishermen who know how to pass on these values from generation to generation. Accordingly, the eggs from these free range hens, which are reared on sustainable farms, will be available at all Carrefour stores.

A boost for local and regional products.
Ángel Monreal, Carrefour Spain French Produce Manager and Miguel Esteban Martín from the producer, Granja Virgen del Rosario, took part in the event. The specifications listing all details of the collaboration between the two entities and providing a road map for further collaboration to take place during 2017 were also signed at the meeting.

Fresh free-range eggs.
The eggs produced by Granja Virgen del Rosario are laid by hens raised on sustainable farms in Aragon that have outdoor access and an entirely plant-based diet consisting of cereals such as maize, barley and wheat. They are also totally free of antibiotics and coccidiostats during the laying season, and have nest systems that allow the hens to lay their eggs undisturbed.

From a sanitary point of view, the farms have a salmonella control plan in place, as well as protection procedures through which a series of vaccinations are given that protect the animals for the rest of their lives.

Calidad y Origen, two Carrefour objectives
This bran, which has been present in the aisles of Carrefour stores for over 15 years, is a response to growing consumer demand for products guaranteeing the original flavour of food, that have regard for animal welfare and the environment, and that are produced by crop and livestock farmers and fishermen with a passion for their products marketed at the best price. Over the coming months, Carrefour will be concluding agreements with different local fish, fruit, vegetable, meat and delicatessen producers.