Within the framework of Carrefour’s official involvement in the COP21 international conference on climate, Avi Coop. S.c.a (Amadori), winner of the “Major challenge for Suppliers regarding Climate”  in Italy, will be represented in Paris on 19 and 20 November to take part in the final event which will feature winners from the Group’s 10 integrated countries.

In Milan, 14 October 2015, the companies taking part in the “Major challenge for Suppliers regarding Climate” have all been recognised for the effective policies they have adopted to help tackle climate change.

This initiative was an opportunity for the suppliers to unveil their solutions.

The utility and benefits of the projects were assessed by an expert panel which included representatives from the Italian Ministry for the Environment, WWF Italy, the Polytechnic University of Milan and non-profit organisation Plant Life Economy Foundation.

The AMADORI SpA, Avi.Coop factory, based in San Vittore di Cesena, employs 2100 people. It produces turkeys and traditional chickens under the Carrefour and Amadori brands. At its San Vittore di Cesena factory, Amadori has set up an anaerobic digestion (or methanisation) and cogeneration facility for converting organic matter left over from the manufacturing processes into biogas. The biogas produced from methanisation is then transformed into electricity and heat by the cogeneration system. And the digestive residue is used as fertiliser for farming. Amadori has also reduced its biomass waste by 95%, and has reduced its odour emissions and the number of lorries it uses to transport waste. 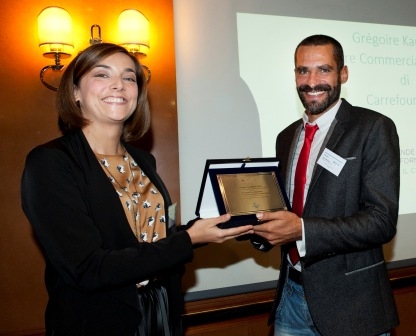