LONDON, 2016-Mar-29 — /EPR Retail News/ — Debenhams the multi channel retailer is experiencing a growing trend of ‘masstige’ dressing for kids with sales of premium brands delivering double digit growth. Top of the list is the ‘mini me’ fashion brand Baker by Ted Baker which has delivered 25% sales growth in the last five years, with increasing appetite for the range over recent seasons.

The rise is attributed to parents’ upgrading their children’s wardrobe and dressing kids as an extension to their own fashion image and also the increasing desire for children to receive clothes as part of their gift lists for Christmas, Easter and birthday. This Easter Debenhams expects to sell 63,000 units of Baker by Ted Baker childrenswear as clothing makes an appearance alongside Easter eggs on gift lists.

The department store, which introduced Designer wear at high street prices for children in as early as 2000 with its Rocha.JohnRocha line has a new hero brand in the shape of Baker by Ted Baker, an exclusive line launched in 2012. Selling an annual 1.5 million units, the Baker by Ted Baker range has captured the attention of UK parents with its distinct style of graphic print, sumptuous colourways and premium fabrics. Originally offered as boys and girlswear, the Baker by Ted Baker brand now incorporates children’s swim, nightwear, underwear and footwear.

Sales for the Baker by Ted Baker brand which is stocked in the UK, the Middle East, Russia, Cyprus, Iceland and Turkey have been on an upward trajectory as more and more parents choose to dress their children in a ‘mini me’ established fashion brand. “Following in the footsteps of North West and Harper Beckham parents are upgrading the kids wardrobe and opting for a look that adds to their overall fashion credibility,” says Childrenswear Head of Buying, Shani Delargy.

“Where we see an average selling price of £9 on entry price point kidswear, we see that parents will happily upgrade to £20 an item on boyswear and £25 an item on girlswear for a more premium fashion brand. Fuelling the demand is the ongoing pester power of both girls and boys who are keen to select their own clothing and are adding clothing to their holiday and birthday gift lists.”

Areas in the UK bitten hardest by the Baker by Ted Baker bug are the North Midlands which accounts for 30% of the brands sales followed by East Anglia with 11% of sales. The North and Central regions are also big fans of the brand with an additional 10% of sales each.

Easter and Christmas are key periods for Baker by Ted Baker sales as parents indulge their children with new outfits as part of the experience of spending time with family. The Christmas 2015 season saw the brand sell almost 600,000 units with a line of girl’s party dresses selling out in a two week period. Items tipped to be Easter 2016 treats include girls’ dresses and boys shirts and shorts.

For the boys, easy-to-wear brogues take centre-stage with twists on the classic design. From a sporty take which incorporates a white sole, to the hybrid brogue mixing traditional elements with a high ankle design, perfect for winter. The modern hi-top trainer in dark navy is finished with a traditional tan collar and tongue, ensuring he can always put his most fashionable foot forward.

Stylish, hardwearing and waterproof, this range is perfect for parties yet made to last! 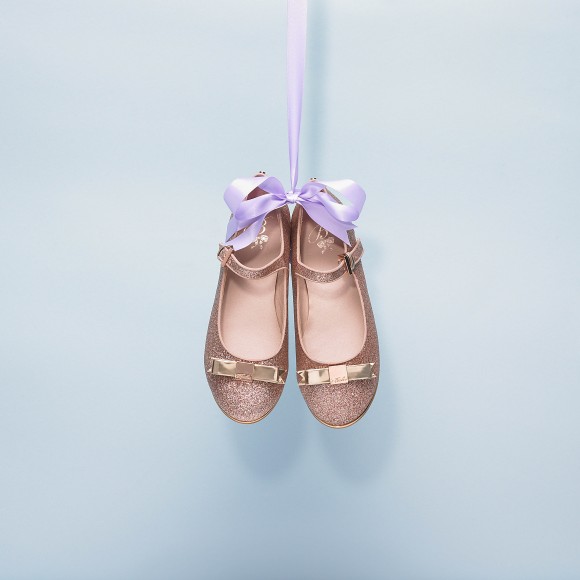 Baker by Ted Baker shoe collection for kids in stores and online at Debenhams.com this Autumn