The Foundation launches its health insurance project for the Bangladeshi workers, in partnership with the “GK Savar” NGO and its French support committee.

BANGLADESH, 2016-May-11 — /EPR Retail News/ — The Weave Our Future Foundation was created in June 2014 in order to improve the living condition of workers in Southern countries. It accompanies and impulses social, medical or even educational initiatives that seek to benefit workers in the textile and clothing industries in developing countries, and thus takes part in the improvement of their working and living conditions.

After 1 year of preparation, the Foundation launches its health insurance project for the Bangladeshi workers, in partnership with the “GK Savar” NGO, specializing for more than 40 years in the health field.

The implementation of a medical coverage will benefit more than 20,000 workers in the textile industry and their family, and will start in July 2016.

The aim of this pilot and innovative project is to ensure the coverage of medical expenses related to common pathologies. Co-financed by the factories’ owners and the foundation, the membership will be made on a voluntary basis from the workers who will have followed an information session. They will then have access to a free 24h/24 medical service in GK Savar’s hospitals and medicals centres. A medical consultation will also be proposed once a week in their working places. Moreover, the medicine’s cost will be half-covered by the insurance.

The WOF Foundation decided to heavily support this project during at least a 4-year period for $1.8 million, increasing its commitment to improve the workers’ working and living conditions in the least developed countries. 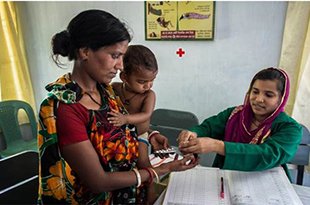