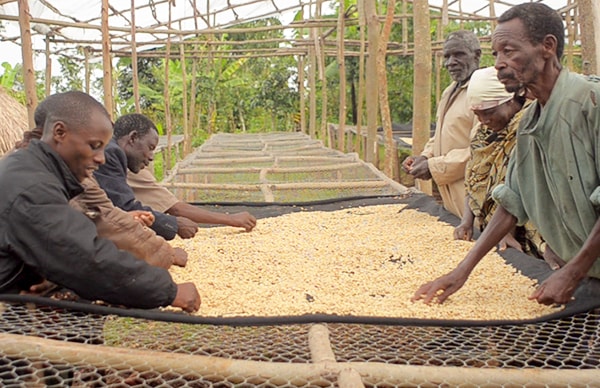 Halle, 2017-Oct-17 — /EPR Retail News/ — A container of green coffee arrived today (13 October 2017) at Colruyt Group’s roasting centre in Ghislenghien. It comes from North Kivu, a region plagued by many difficulties, in the east of the Democratic Republic of Congo. Colruyt Group has joined forces with the Belgian Vredeseilanden (Rikolto) NGO to support Kawa Kabuya, a cooperative of 2,200 small coffee growers. How? By guaranteeing a significant purchase volume for 3 years, 60% of which is paid for by pre-financing the harvest. Thanks to this financial lifeline, the cooperative can maintain its exports and invest in its activities. Colruyt Group and Vredeseilanden (Rikolto) prove once again that a long-term trade agreement is a real added-value for small Third World producers.​

A long-term supply agreement
This delivery of green beans from Kivu is the first to be made under the terms of the new supply agreement signed in March 2017 between Colruyt Group and Kawa Kabuya. The agreement covers a period of at least three years. It guarantees the cooperative an outlet for 28.5 tonnes of green coffee beans per year, about 20% of its production, at a price higher than the market rate (+$0.50 per pound). Beyond the commercial agreement, Colruyt Group wants to support the cooperative in its development efforts. Made possible notably thanks to the pre-financing of the harvest.

Pre-financing the harvest
Philippe Toussaint, project manager sustainable purchases Colruyt Group explains, “Like many Third World cooperatives, Kawa Kabuya pays its small producers when they deliver their crops, in other words several months before the coffee is sold. As it doesn’t have liquid reserves, it has to use bridging loans to finance this operation. However, in this troubled region, credit is very expensive. We remove the financial obstacle to progress by settling 60% of the amount of our purchase before the harvest.”

Sector project
The origin of this agreement goes back to 2016 when Vredeseilanden (Rikolto) put Colruyt Group in touch with Kawa Kabuya. After a test at the end of 2016, Colruyt Group decided in March 2017 to integrate the cooperative’s Arabica into its range. Already on the shelves in Colruyt Best Prices and OKay, this coffee will also be available in Spar from January 2018. This involves giving this quality product the very best commercial opportunities around which Colruyt Group can develop one of its sector projects. The objective is to get the cooperative’s 2,200 small growers into a virtuous circle of economic strengthening.

The best coffee in the Congo
The financial boost provided by pre-financing the harvest aims to give the cooperative the means to invest. For example, by applying for certifications which will enable it to position its coffee better on the international market. It must be said that Kawa Kabuya has strong reasons for targeting this outlet: it produces the best coffee in the Congo. It won the African Fine Coffees Association’s Taste of Harvest competition in 2105, 2016 and 2017. Recognition of the efforts undertaken by the cooperative’s small growers who are working resolutely to revive quality coffee growing in the Kivu highlands.

Technical support
This revival has been supported by Vredeseilanden (Rikolto) since 2011. The NGO is conducting an extensive capacity-building programme in Kivu. Its objective is to add value to this region in order to develop the culture of more profitable coffee export,  and thus help to eradicate poverty in this region which has been plagued by many problems. It acts to support and train coffee growers with a view to high quality production, to organise them into cooperatives and connect them to international buyers.

Objective: quality
Kawa Kabuya was created within this context in 2014 in Butembo. Its coffee growers are scattered across the western heights of Lake Edward and gathered around 45 micro-washing stations (MWS). The MWS is at the heart of the of the system set up by Vredeseilanden (Rikolto). Each one ensures the initial treatment of the harvest. So these operations, essential to the quality of the beans, are carried out centrally in each sector by a well-trained workforce with the proper equipment. This guarantees optimum quality.

Collibri Foundation
Colruyt Group will not just stay there in Kivu. Wherever it is involved in a sector, it launches complementary training projects through its educational fund, the Collibri Foundation, managed by the King Baudouin Foundation. The foundation is currently in contact with potential partners to set up training for young people in the region.