Starbucks will open the first of these stores in the Englewood neighborhood of Chicago’s south side; the West Florissant neighborhood in Ferguson, Missouri; the Jamaica neighborhood in Queens, New York; Milwaukee, Wisconsin; and will remodel its store at 7th & Camelback in Phoenix, Arizona. Each of these locations will have an onsite training space where young people can learn valuable customer service and retail skills, based on the same world-class training Starbucks partners (employees) receive. Starbucks will also partner with local youth services organizations and government to leverage existing programs that help connect young people with internships, apprenticeships and jobs in the community and foster the type of dialogue and engagement needed for continued social change.

“We have a long history of developing stores in diverse neighborhoods and we hope to do even more – together with the community – to bring great jobs, engage young people, and drive economic opportunity for all,” said Blair Taylor, chief community officer for Starbucks and chair of the Starbucks Foundation. “We want to be part of the solution in these communities and help create a sustainable future for those who may be looking for a second chance.”

Starbucks will hire on average 20 to 25 partners (employees) per store from the local community, providing a new pathway to opportunity through training and development, meaningful career options and industry-leading benefits that include the chance to get an online, tuition-free bachelor’s degree from Arizona State University through the Starbucks College Achievement Plan.

“There’s a quiet, much-needed movement underway to rebuild Ferguson” said Michael McMillan, chief executive officer for the Urban League of Metropolitan St. Louis, which recently broke ground on a new jobs and education center for youth in Ferguson. “Starbucks is stepping up and investing in our community in a way that will open up exciting opportunities for all. We hope more businesses will appreciate this city’s resilience and join us in turning what was a tragedy into a triumph.”

“We want to decrease the number of young men and women in Phoenix who are not connected to meaningful educational or career paths,” said Mayor Greg Stanton. “I applaud Starbucks for helping low-income, diverse communities address this problem. These new Starbucks stores will help engage our young people with exciting new training opportunities and help support our city’s minority-owned and operated suppliers.”

“In making this commitment to open in Englewood, Starbucks, like Whole Foods, sees the opportunity and revitalization occurring in one of Chicago’s oldest neighborhoods. This is further proof that when the public and private sectors come together to invest in communities, we can create new jobs and economic resources that will spur economic growth into the future,” said Mayor Rahm Emanuel.

“A new generation of young people – especially in low-income communities – are at risk for never, ever having a job,” said Congressman Bobby L. Rush of the 1st District of Illinois. “These young people are often neglected, especially those who are no longer in school or unable to find jobs, and are not being trained to be productive citizens in the workplace. We look forward to welcoming Starbucks to our Englewood community and share in their ongoing commitment to the training, employment and education of our nation’s youth.”

To determine which communities are a good fit for this store concept, Starbucks looks at all the available data on the socio-economic health of America’s cities to understand which communities have the biggest opportunity gaps, which have the biggest need for business investment and leadership, and where there is local movement underway to build a better future for its residents. The company plans to accelerate the development of these stores over the next three years with the goal of opening in at least 10 additional cities by 2018.  Starbucks will monitor the success of the stores for continued adoption to embed with our store development strategies.

Today, the Starbucks Foundation also announced it has awarded $1.5 million in Opportunity for Youth grants to 72 nonprofit organizations in 15 U.S. cities for fiscal year 2016. These grants, ranging from $5,000 to $75,000, build on the foundation’s long history of investing in proven, as well as innovative, programs that equip young people ages 16-24 with the skills and training required for the changing global economy. Starbucks partners (employees) engage and volunteer with the organizations to help young people become job-ready and develop skills to continue on the pathway of opportunity. Since launching in 1997, the Starbucks Foundation has grown to support communities around the globe. In 2014, the foundation gave $13.1 million in 2014, making 144 grants to nonprofit organizations, including $3.37 million to organizations supporting opportunity youth around the world.

“The Starbucks Foundation is dedicated to empowering our nation’s young people to seek out the right path forward through development and training, public service and volunteering, educational opportunities as job readiness,” said Taylor. “We are thrilled to be able to award $1.5 million to these well-deserving non-profits who will help multiply impact beyond our stores and make a meaningful impact to these young future leaders.” 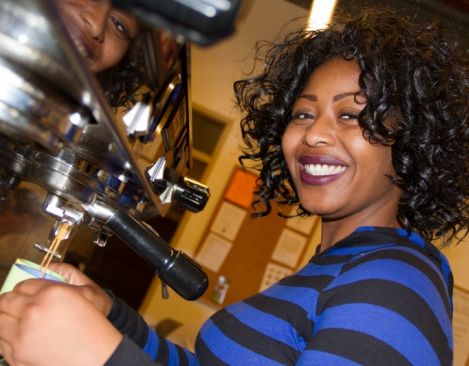