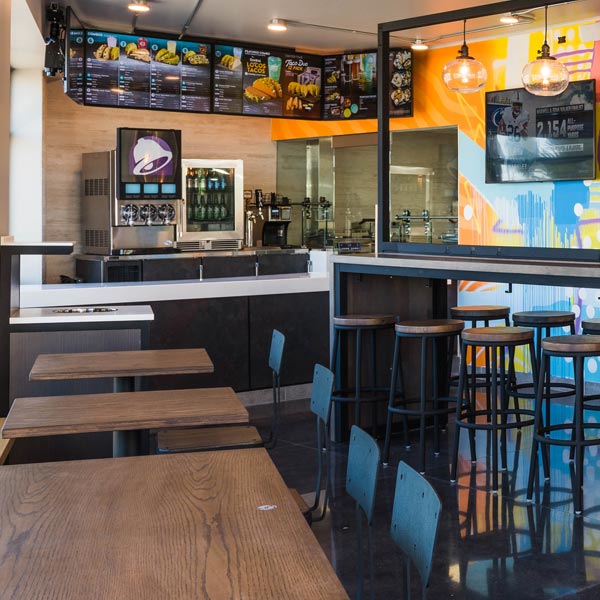 IRVINE, Calif., 2017-Dec-18 — /EPR Retail News/ — Taco Bell’s expansion with drive-thru free restaurants is continuing its spread across the US with the first Cantina to open in Southern California. Newport Beach joins Wabash and Cincinnati as Cantina openings in the past month alone – bringing the total to 11. Additional city locations in Manhattan, Brooklyn, Chicago, Boulder, and Madison will be coming soon, adding to the continued urban development growth of 300 drive-thru free locations opening over the next 5 years.

The Newport Beach Cantina, which opens to the public Friday, December 15, will feature an exclusive Taco Bell beer, Twisted Freezes, open kitchen, local artist murals and a walk-up order window — all in the heart of the Newport Beach Peninsula. Initial hours of operation will be 7am to 2am.

In celebration of Southern California’s first Cantina, Taco Bell and Huntington Beach local Four Son’s Brewing have partnered to unveil an exclusive beer made specifically to complement the Taco Bell menu, a brand first. Together, Four Sons’ brewmasters and Taco Bell’s culinary chefs have joined forces to create Beach Bell, a Mexican-style Amber Lager made with a unique flavor profile to enhance and compliment Taco Bell’s food and flavors. The light, crisp, and refreshing beer has a smooth and robust taste with a clean finish that makes it the perfect beverage to pair with a Taco Bell meal. Beach Bell Amber Lager will only be available for a limited time at the Newport Beach Cantina.

This collaboration comes as Taco Bell continues to push into new urban locations across the country. Recently, Taco Bell announced continued expansion with a planned 300 drive-thru free locations opening over the next five years – many of which will serve alcohol. Taco Bell Cantinas feature a smaller footprint leveraging urban or in-line development, localized design and artwork as well as alcohol offerings, including beer.

ABOUT TACO BELL® CORPORATION
Taco Bell Corp., a subsidiary of Yum! Brands, Inc. (NYSE: YUM), is the nation’s leading Mexican-inspired quick service restaurant (QSR) brand. From breakfast to late night, Taco Bell serves made-to-order and customizable tacos and burritos, among other craveable choices, and is the first QSR restaurant to offer American Vegetarian Association (AVA)-certified menu items. Taco Bell and its more than 350 franchise organizations proudly serve over 42 million customers each week through 7,000 restaurants across the nation, as well as through its mobile, desktop and delivery ordering services. Overseas, Taco Bell has over 250 restaurants, with plans to add 2,000 more restaurants internationally within the next decade. The brand encourages its fans to “Live Mas” and connects with them through sports, gaming and new music via its Feed The Beat® music program. Taco Bell also provides education opportunities and serves the community through its nonprofit organization, the Taco Bell® Foundation™, and connects fans with their passions through programs such as the Live Mas Scholarshipprogram. In 2016, Taco Bell was named as one of Fast Company’s Top 10 Most Innovative Companies in the World.