Dubai, United Arab Emirates, 2017-Apr-17 — /EPR Retail News/ — Majid Al Futtaim, the leading shopping mall, retail and leisure pioneer across the Middle East, Africa and Asia, announced today ( APRIL 13, 2017) that Carrefour Hypermarket in Dubai Festival City will be opening soon, increasing the number of its hypermarkets in the UAE to 23.

Carrefour is proud to cater to the needs of the Garhoud community and the surrounding neighbourhood. This strategic expansion is planned to take place just before Ramadan, demonstrating Carrefour’s commitment to offer quality and value at competitive prices to their clients.

Carrefour looks forward to the opening of its new hypermarket and to provide their clients with great moments everyday. Meanwhile, clients can continue to enjoy a unique shopping experience at Carrefour Hypermarket in City Centre Deira and City Centre Mirdif. 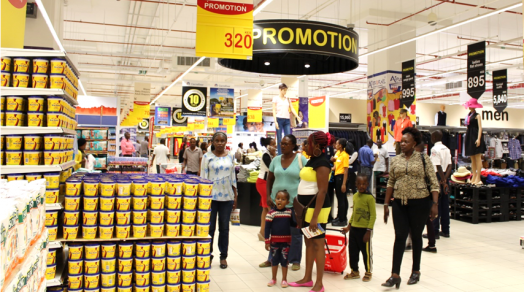 Nairobi, 2017-Mar-07 — /EPR Retail News/ — Our partner, Majid al Futtaim has opened a a Carrefour Hypermarket at the Two Rivers Mall in Nairobi.

Based in Nairobi’s diplomatic “blue zone” in Limuru Road, a brand-new 7200 m² Carrefour store opened in this building complex, where 205 local jobs will be created.

The whole complex has been built in compliance with the principles of sustainable development: the solar panels located on the building’s roof – the largest concentration of them in Africa – will generate 2 MW of solar power. And 80% of the waste-water produced will be recycled and treated in accordance with WHO norms.

Belgium, 2016-Oct-30 — /EPR Retail News/ — The “Prix Mercure” is the most coveted award in Belgium’s retail sector. It is presented by Comeos, an organisation set up to represent retail and services in Belgium, and is awarded to the best store every year.

Carrefour decided to enter its “Les Grands Prés” hypermarket in Le Mons for the challenge. An independent panel made up of seven retail specialists voted for the “store concept of the year”, selecting one from numerous contenders. All of them placed the emphasis on the customer experience, as well as what it is like for employees to work at them, and represented a major innovation on a market that is mature or otherwise.

The panel revealed the name of the 2016 “Prix Mercure” winning store at a prestigious awards ceremony on 26 October at Le BEL (Tour & Taxis). And it was the Mons store which won the prize!

This store was presented with the award because:
>  The service with a human face that it provides successfully incorporates digital technologies
>    It places the emphasis on business expertise (a pizza maker, a chocolatier, a sommelier, and beer that is brewed on site)

Congratulations to all of the teams who played a part in this excellent result!

Located in the city of Nizwa, the store extends over a sales area of 5000 sqm.

It is situated in a shopping center including 80 shops, an ice rink, a tenpin bowling and a car park of 974 places. 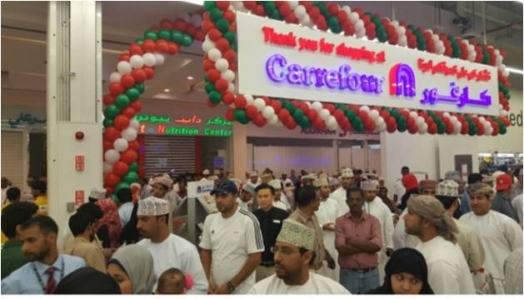 Abidjan, Ivory Coast, 2015-12-23 — /EPR Retail News/ — Within the framework of the partnership between CFAO and Carrefour that was formalised in May 2013, the first Carrefour hypermarket has just opened in the Ivory Coast, in Abidjan.

It’s located in “PlaYce Marcory”, a brand-new 20,000 m² shopping centre. Designed and operated by CFAO, it features 3 separate areas: the Carrefour hypermarket with its 3200 m² sales area, a 55-store shopping centre and a food court with a seating area that can accommodate up to 400 people.

The hypermarket employs 510 people, practicing more than 100 different jobs. Carrefour’s teams were involved in the selection processes and will continue to manage the employees so that the relevant skills can be properly transferred. 16,000 hours of training delivered since April 2015.

The store has a very wide range (more than 30,000 items) and features national brands, Carrefour own-brand products and local products. The store also has a number of traditional sections – a butcher’s, a fish counter and a bakery/pastry section.

As far as equipment is concerned, the store minimises its environmental footprint by using LED lighting exclusively and closed ultra-fresh refrigeration units.

The Carrefour/CFAO partnership
This partnership began in May 2013 and involves a joint-venture company 55% of which is controlled by CFAO and the remaining 45% by Carrefour. The company operates supermarkets and hypermarkets in PlaYce shopping centres in eight countries throughout the region (Cameroon, Republic of the Congo, Ivory Coast, Gabon, Ghana, Nigeria, Democratic Republic of the Congo and Senegal).

By entering into this agreement, CFAO – Africa’s leading retail group, and Carrefour – the world’s second-largest retail group, are providing consumers with all of Carrefour’s strength and the expertise of its central purchasing units, together with CFAO’s intimate knowledge of distribution channels in Africa.

This opening marks the first step in a major development plan involving CFAO, Carrefour and other partner brands that will be deployed over the next few years in eight African countries.
Carrefour stores located in PlaYce centres can be of a number of different formats: neighbourhood retailers, supermarkets or hypermarkets. 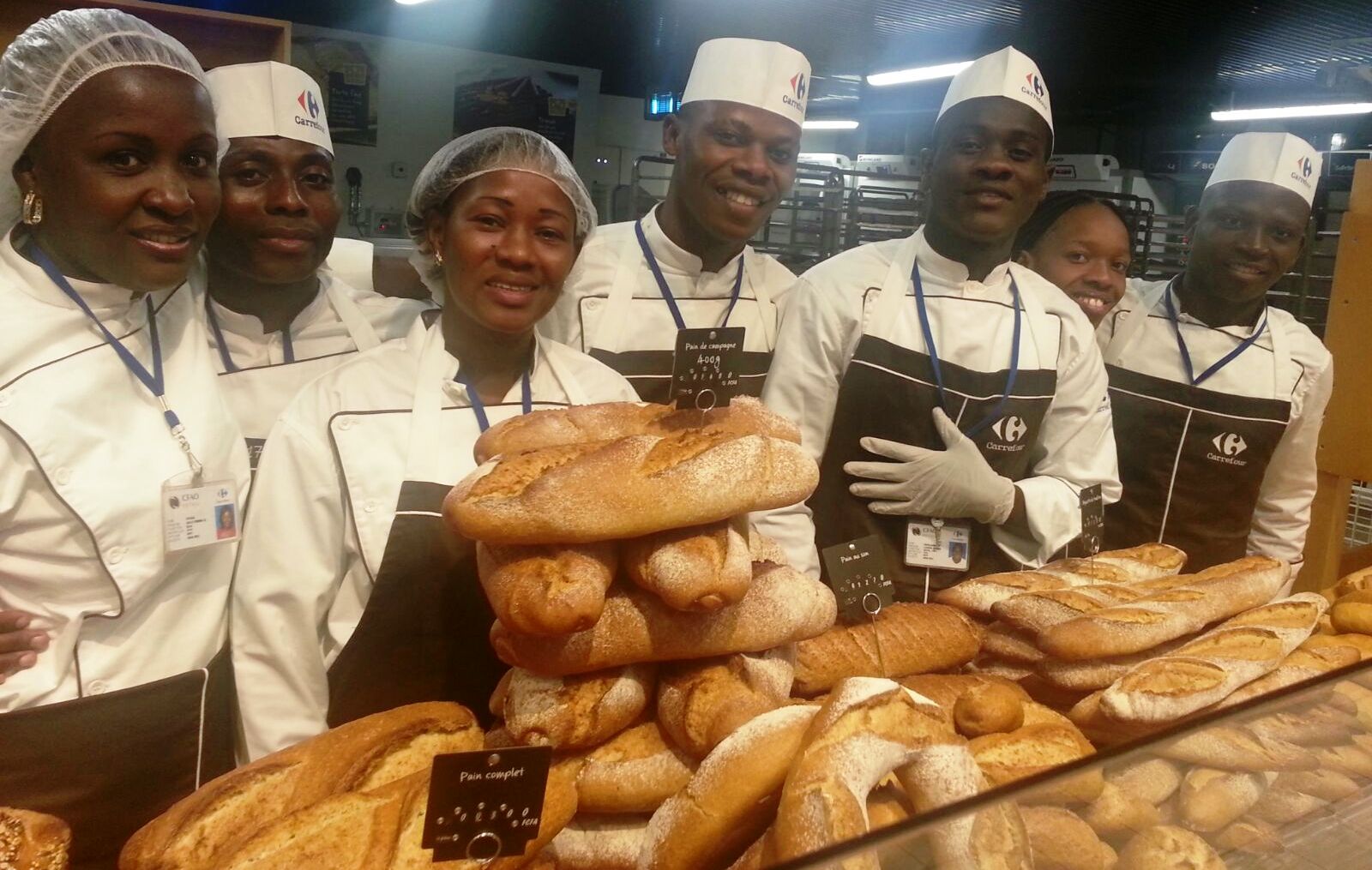 First Carrefour hypermarket opened in the Ivory Coast in Abidjan

The Timisoara Carrefour hypermarket has a sales area of 7800 m² and includes all the standard butchery, delicatessen, grilled meats/pizza, bakery and confectionery counters.  Customers can choose from a wide range of more than 50,000 items.

Well served by the city’s public transport system, there is also a free car park with spaces for 1800 cars.

Opening the store has created some 300 new jobs.

Carrefour Timisoara is also particularly focused on minimising its impact on the environment: its equipment is designed to keep electricity consumption and carbon emissions to a minimum. Its LED lighting system, for example, reduces electricity consumption by 35%, its refrigeration system reduces carbon dioxide emissions by more than 900 tonnes per year, while diverting heat generated by the store’s refrigeration systems to the store’s ancillary storage areas eliminates all requirements for other energy sources.

Located in a new shopping centre in Târgu Jiu (Southeast Romania), the new hypermarket has a sales area of 7500 m², a product selection of around 50,000 items and a car park with space for 1000 cars.

Carrefour Targu Jiu benefits from equipment that reduces electricity consumption and carbon dioxide emissions:
•    LED lighting that reduces electricity consumption by 35%.
•    the refrigeration system reduces emissions of carbon dioxide of more than 900 tons per year.
•    the heat generated by the refrigeration system is diverted to storage areas annexed to the stores, eliminating he need of using other energy sources.
•    the storage areas are equipped with intelligent lighting systems that favor natural light to the detriment of artificial during the day. 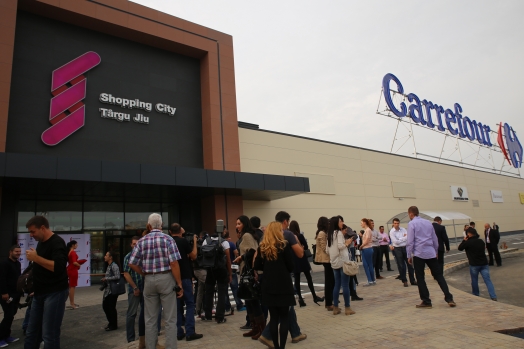 With a sales area of 7500 m², 320 people have been recruited to work at the Carrefour hypermarket. It is open to customers seven days a week from 7:30 AM to 10 PM and has more than 50,000 products. Bread, pastries, confectionery, ready-meals, pizzas and freshly-cooked meats are all prepared on-site by Carrefour teams.

Carrefour is the leading retailer in Romania, and Carrefour Romania is continuing to expand, underpinning its growth by 3 mainstays: low prices, a modern design and motivated employees who are attentive to customers’ needs. 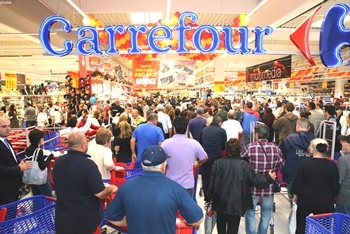