Saskatchewan, Canada, 2014-10-1— /EPR Retail News/ — When her high school classmates were worrying about exams and driver training, Chelsea Laprairie was finding a lump on her breast after turning 16. Chelsea’s compelling story of facing breast cancer is featured in Co-op’s Drink Pink campaign this October during Breast Cancer Awareness Month.

In partnership with Van Houtte Coffee Services Inc. and local retail Co-ops, Drink Pink sales raised $111,000 last year and have raised $457,000 since 2010. In October 2013, Co-op donated an additional $500,000 to the CBCF, the first installment of the $1.5 million that the Co-operative Retailing System (CRS), comprised of local Co-ops across Western Canada and Federated Co-operatives Limited (FCL), pledged to the CBCF over the next three years.

“We’re not only raising funds for breast cancer research through Drink Pink coffee and merchandise sales, we’re helping build awareness through an online campaign that shares a young woman’s story to highlight the need for screening and ongoing research,” said Vic Huard, Executive Vice-President of Strategy, FCL. “And thanks to the tremendous support of retail Co-ops, their members and customers, we are able to enhance the Drink Pink campaign with an additional $1.5 million over three years.”

Laprairie is well-suited as an advocate since she experienced and survived breast cancer at an age when most don’t consider it as a possibility. During her video interview, she was asked what she would say to another young woman faced with the same scenario.

“As weird as you may think it is, you have to [go for a screening]. There’s no harm in getting it checked out,” said Laprairie, who is now cancer-free and attending university. Co-op customers, members and western Canadians can see Chelsea share her full story on a video interview at www.drinkpink.coop.

The Canadian Breast Cancer Foundation-Prairies/NWT Region is raising its cup of Van Houtte® coffee in support of this fifth annual Drink Pink Campaign with Co-op. Monique Levesque-Pharoah, Senior Development Officer with the Canadian Breast Cancer Foundation-Prairies/NWT Region said, “Co-op has become one of our most impactful partners in helping us create a future without breast cancer and their support allows us to continue funding research that makes a difference and saves lives.”

“We are thrilled to have such wonderful partners in this impactful program. We look forward to continuing to raise awareness, as well as contribute to raising funds for this worthy cause,” said François De L’Étoile, Vice-President of Van Houtte Coffee Services Canada. “The success of the Drink Pink coffee program has been remarkable. Together, we are truly making a difference!”

Co-ops across Western Canada are also supporting breast cancer research, fundraising and awareness through the CIBC Run for the Cure. The CRS is a regional run sponsor this year, donating bananas, oranges and granola bars for over 30,000 participants at 10 race locations on Oct. 5. 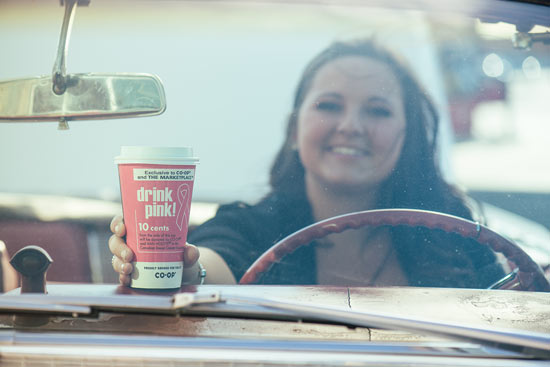 Chelsea Laprairie is a young breast cancer survivor. Learn more about her story and Co-op’s Drink Pink campaign at www.drinkpink.coop.