“Christina came in with a big group of people around 4:30 in the afternoon. She told one of our baristas she wanted to buy coffee for everyone for the next hour,” said Alexis Warren, store manager of Starbucks Rockefeller Center Concourse location. “Instant pandemonium is the best way I can describe it.”

Warren said Aguilera handed the barista several hundred dollars in cash and was surrounded by about 30 people within a few minutes who recognized who she was.

The singer, songwriter is also a judge on The Voice, which returns with a new season of contestants next week. Although Starbucks is a sponsor of the NBC TV show, Aguilera said her offer of “free coffee” was not related to any promotion, she just wanted to surprise people.

Warren, who’s been a Starbucks partner (employee) for 10 years, said the gift of “Coffee on me for the next hour! Head to 30 Rock!” – as Aguilera tweeted – made for a “really fun, high energy afternoon” for customers and partners.

Incidentally, Aguilera didn’t order anything from the store, but she did leave behind an autographed Starbucks cup with a lipstick kiss.

Starbucks partners pictured in the photo above  (clockwise from bottom left) Kaity, Kershawn, Alexis, Joseph, Valerie, and Carla. Not pictured are Sophiya, Natasha, Johnathan, and Khadim. 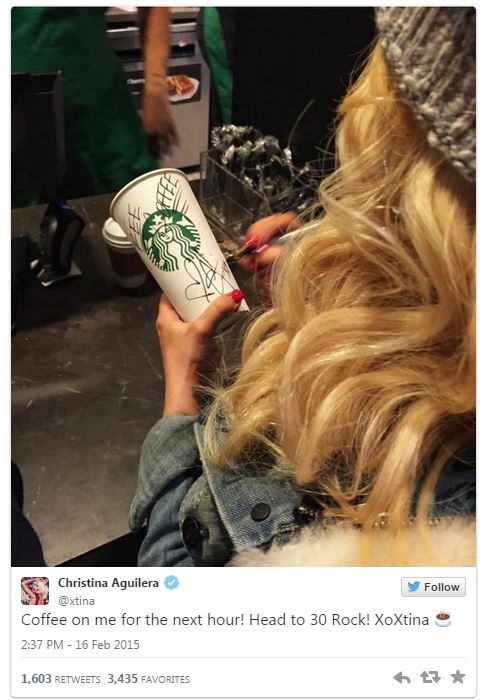