MANCHESTER, England, 2015-9-18 — /EPR Retail News/ — Good causes across Scotland are set to “bag” a funding boost of more than £750,000 as The Co-operative today (Wednesday, 16 September) launches its Local Fund to share the money raised through carrier bag charges and sales in its food stores.

The community retailer is calling on local causes or community groups interested in “carrying” away a share of the Co-op Local Fund to apply online by Wednesday, 7 October.

It is envisaged that approaching 1,000 organisations and groups across Scotland will receive grants of between £200 and £2,500 from The Co-op Local Fund to make a difference in their community.

In addition to the 5p minimum charge on single-use bags, The Co-op has also pledged to go further and top-up the fund with proceeds from its entire range of carriers, including sales of its bags-for-life and its new woven reusable shopping bags.

Applications can be made until midnight on Wednesday, 7 October. Then, between 16 November and 11 December, the community retailer will give its one million members in Scotland a chance to vote and have a say, from a shortlist of organisations, on how the fund will benefit local communities.

“The Co-operative is a community retailer with a strong heritage and commitment to the environment and to supporting its local communities.

“We are asking the Scottish public to nominate those causes that they care about and would like to see supported through The Co-op Local Fund. The Co-operative’s one million members in Scotland will then have a unique opportunity to vote and say how the money should be shared.

“The Co-op shares the aspiration of reducing the number of single-use carrier bags in use. It is also encouraging shoppers to further reduce their reliance on single-use carriers by donating proceeds from its reusable bags to good causes too. The money raised will enable organisations across Scotland to make a difference in their community – together, we will reduce, reuse, recycle, and reinvest in our communities.”

“Since the carrier bag charge came into force we have seen a huge reduction in single-use carrier bags in circulation in Scotland – around 150 million fewer last year alone. This has been a huge success with people changing their shopping habits to take re-usable bags with them.

“This scheme from The Co-op illustrates how the carrier bag charge is not only benefitting the environment, but it is also making a positive difference in the communities where the money has been raised.”

“It is fantastic to see the carrier bag charge raising so much money for good causes, as well as achieving such drastic reductions in the number of single-use carrier bags being handed out in Scottish stores. I would like to commend The Co-operative for their support, and to encourage as many projects and local good causes as possible to apply in order for their communities to benefit from a share of the funds”.

The Co-operative has seen an 80% reduction in single-use carrier bags in circulation since the introduction of the charge.

For further information or to make an application, visit www.co-oplocalfund.co.uk

The Co-operative Group, one of the world’s largest consumer co-operatives, with interests across food, funerals, insurance, online electrical and legal services, has a clear purpose of championing a better way of doing business for you and your communities. Owned by over 8 million members, The Co-operative Group operates a total of 3,750 outlets, with around 70,000 employees and an annual turnover of approximately £10 billion 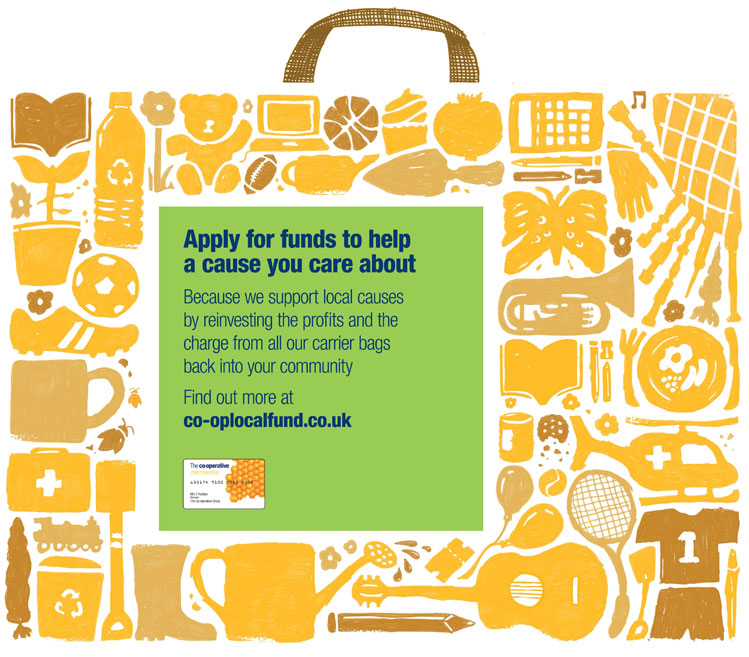 The Co-operative food launches its Local Fund; calls on local causes to apply by Wednesday, 7 October