‘Found It’, the highly successful campaign for 2014 is evolved for 2015 with a more emotive message which highlights Debenhams’ gift offering for a wide range of recipients – making the product the hero, demonstrating the breadth of offer and conveying the chain’s new leading-edge online delivery propositions including next day delivery when you order by midnight.

Designed to capture the period of both self-purchase, getting ready, and major gift buying the campaign launches in store at the end of October and aims to steal a lead in the battle for the Christmas shopper.

‘Found It’ will appear across the UK and ROI estate of 169 stores as well as in advertising, direct mail, online, PR and social media.  The campaign takes a more personal approach to gifting through creating present suggestions for personas including: ‘Found It For the fashionista’; ‘ Found It For the girl who likes to sparkle’; ‘Found It For the weekender’; ‘Found It For the one you love’; and ‘Found It For the littlest one’.  Store windows feature ‘Found It’ and showcase the best in gifting across all categories.  An exclusive Oxford Street flagship window will be revealed on 1st November featuring dynamic video content in partnership with exclusive cosmetics brand, Make Up Forever, bringing the exterior of the building to life.

A further build on the £2 million investment made last year into Christmas decorations and collateral will continue to ensure customers feel festive and give a sense of theatre in store that cannot be replicated online. In addition, this year all Debenhams carrier bags will be ‘turning red’ with ‘Found It’ branding for the season.
Debenhams’ army of 180 personal shoppers are to become ‘Gift Finders’ and through an online reservation service customers will be able to book an appointment and delegate their Christmas shopping. Personal shoppers will find gifting solutions for loved ones as shoppers relax in the Personal Shopping gifting suite.

A print run of over 2 million, 160 page gift guides combine the retailer’s fashion and beauty, home and toy offer showcasing 1,000 gift ideas.  These can be picked up in the retailers’ stores and have been inserted in the Mail on Sunday.

Digital and 48 sheet advertising breaks from early November followed by TV and radio advertising. TV concepts appear as 20” and 10” formats kicking off with the prime ITV X Factor break.  The creative focuses on the emotion of a recipient when they receive the perfect gift. A host of famous voices have been recruited for the campaign including Dawn French, Sarah Millican, Jamelia  and James Nesbitt.  The six separate concepts will sit together as a 60” execution on YouTube.   Retained agency J.Walter Thompson devised the campaign, TV executions were shot by Jamie & Jamie from the production company, Hoi Polloi and print executions were created by the Debenhams in house Creative team. This approach to shorter length TV ads sees the retailer doubling the number of times its customer will see the ad.

Debenhams Marketing Director, Richard Cristofoli says, “The ’Found It’ campaign was designed to celebrate the moment of finding and receiving the perfect gift from a loved one.  It was created as a campaign idea that would have longevity, not burn out after its first year.  Feedback on our 2014 campaign was extremely positive and we are pleased to return with an even stronger emotional connection this year.

“Our campaign is multi-channel and seeks to make smart use of resource with for example, shorter length TV ads that see us deliver a higher frequency of media,” continues Cristofoli.

PR and social media will also highlight the offer with influencer gifting activity, Instagram and Facebook competitions.  In addition, online curated gifting for persona editorial will showcase key items from the Debenhams offer.  Customers will be encouraged to share a ‘selfie’ of themselves using #found it with the ideal gift they have found at Debenhams for the chance to win a £1,000 gift card.  Entrants into the competition will also have the chance to appear as part of a Metro cover wrap in December.   Activity to prompt continuous conversations using #foundit, which trended in the number one spot in the UK in 2014, will also take place throughout the period.

Set to deliver strong talking points globally, a range of international territories are also running elements of the ‘Found It’ campaign in support of Debenhams’ 70 international stores including Debenhams in Malta, Cyprus and Latvia. 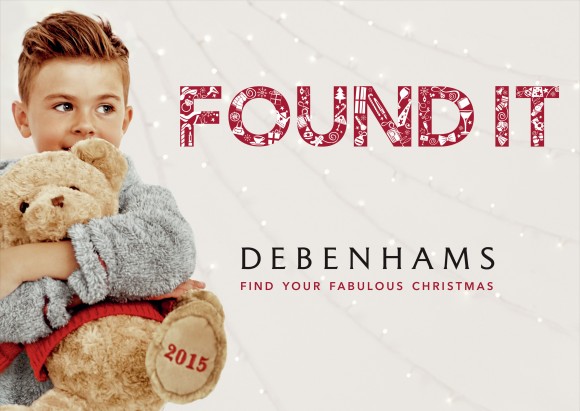