MADRID, SPAIN, 2016-Jul-06 — /EPR Retail News/ — It was the perfect location for the award of the prizes, a 9-meter screen was the center of attention for all the guests, who enjoyed a meal surrounded by an exhibition of all the Innovation Awards finalist products and in the company of  colleagues from the retail world, with spectacular lighting of the venue as the night progressed.

The event was opened by Carrefour Spain CEO Pascal Clouzard, who stated, “Retail must recognize and openly award the effort made by those who invest in the research and development of new products sought by today’s society or that improve on existing ones.”

The award ceremony was hosted by celebrated Spanish Television presenter Jota Abril, who surprised everyone by coming out of the screen. Two winners from the first awards ceremony also took to the stage to explain what receiving this award had meant for them. The event was very dynamic, various direct connections were made with twitter, with the tweets published by guests attending the event being posted directly via #premiosinnovación.

Carrefour Spain brought together impresarios, managers, experts from different sectors linked to the food industry, marketing and research, as well as media celebrities to publicize a total of 15 awards selected from the finalist products by an external jury made up of research, business, university and cultural experts.

And the winners were:

After the Prizes were awarded, Jesús Lorente, Food Product Manager Carrefour España, took to the stage where he commented that, “Seven out of every ten innovations produced in Spain can be found in Carrefour,“ adding that, “Betting on innovation creates great opportunities, it is clear that categories in which there is innovation grow four times as much as the rest. It is important for companies to continue to innovate in order for the sector and the economy in general to grow.”

Supporting innovative brands
Carrefour’s Innovation Awards highlights the work of brands that invest in research and development, and are an acknowledgement that cooperation between retailers and producers is a crucial factor in the innovation process. Carrefour Spain is committed to offering its customers a wide selection of goods, including products by leading companies as well as those produced by small and medium-sized enterprises in every region where the chain has a presence. The objective? To offer the widest selection at the best prices on the market, giving customers more freedom of choice.

In two years, this award ceremony has become an annual meeting point of innovation for companies in the foods and consumer goods sectors. 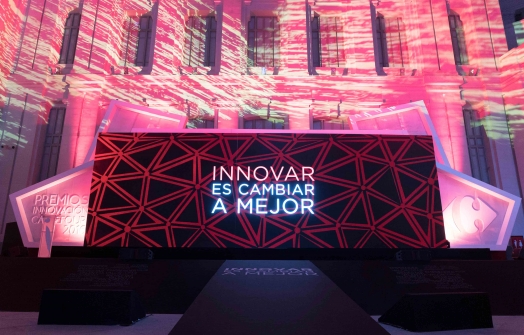