“Dave is a seasoned and trusted leader who consistently delivers strong results. As we continue to simplify our operations across all brands, he is uniquely qualified to drive strategic prioritization and accountability, with a laser-focus on operational excellence,” said Lee.

“I am excited that Dave has accepted this new challenge that will broaden his influence across the organization and ensure a smooth and effective transition at Olive Garden. I am confident that under Dave and Dan’s leadership, Olive Garden will continue to deliver outstanding food and service to our guests,” said Lee.

Darden is a restaurant company featuring a portfolio of differentiated brands that include Olive Garden, LongHorn Steakhouse, Cheddar’s Scratch Kitchen, Yard House, The Capital Grille, Seasons 52, Bahama Breeze and Eddie V’s. Our people equal our success, and we are proud to employ more than 175,000 team members in nearly 1,700 restaurants. Together, we create memorable experiences for 380 million guests each year in communities across North America. For more information, please visit www.darden.com.

ORLANDO, Fla., 2016-Jan-26 — /EPR Retail News/ — Olive Garden is adding catering delivery to the menu at all restaurants in the U.S. and Canada. Guests can now have their favorite Italian meals and breadsticks delivered for family gatherings, office parties and more.

Designed to make organizing special events easier, catering delivery from Olive Garden allows hosts to spend more time with their guests and less time preparing the menu. Olive Garden Delivery Specialists are available to assist with menu planning and will deliver food right to the door. To further assist with guests’ events, Olive Garden’s catering menu has Catering Meal Combinations, featuring bundles of Olive Garden favorites with variety for every taste at an affordable value.

“Our Olive Garden team members are always striving to make any occasion effortless for our guests so they can focus on quality time with their family and friends,” said Dan Kiernan, executive vice president of operations for Olive Garden. “Our guests have long been utilizing our To Go experience for their large-party dining needs, so we’re excited to offer another convenient option with delivery.”

Catering delivery is available for minimum orders of $125 with a 15 percent delivery fee for orders up to $500 and a 5 percent delivery fee for every dollar thereafter. Each delivery order comes with grated cheese, serving and eating utensils, table covers, plates, napkins and Olive Garden’s signature mints. Chafing dishes, racks and fuel are available for purchase to complete the experience.

To place a catering delivery order, contact your local Olive Garden . For more information about delivery and to find your nearest restaurant, visit OliveGarden.com/Catering-Delivered.

ABOUT OLIVE GARDEN
Olive Garden is the leading restaurant in the Italian dining segment with more than 800 restaurants, more than 96,000 employees and more than $3.8 billion in annual sales. Olive Garden is a division of Darden Restaurants, Inc., (NYSE: DRI), which owns and operates more than 1,500 restaurants that generate over$6.8 billion in annual sales. Headquartered in Orlando, Fla., and employing more than 150,000 people, Darden is recognized for a culture that rewards caring for and responding to people. Olive Garden is committed to making a difference in the lives of others in the local community. As part of this commitment,Olive Garden restaurants have donated more than 34 million pounds of food to local community food banks across the country. For more information, visit www.olivegarden.com. Connect with us on Facebook.com/OliveGarden, Twitter.com/OliveGarden and Instagram.com/OliveGarden. 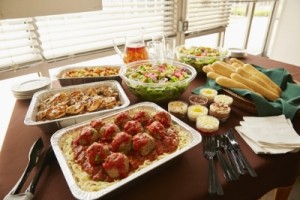 Olive Garden introduces catering delivery in the U.S. and Canada