NEW YORK, 2016-Feb-12 — /EPR Retail News/ — Nordstrom, Inc. (NYSE: JWN) unveiled for the first time the footprint and exterior design of its first Nordstrom store in New York City. The store will encompass four properties in the Columbus Circle neighborhood of Manhattan along Broadwaybetween West 57th and West 58th Streets. The approximately 363,000 square-foot store is expected to open in 2019.

“We’re building in the context of the world’s greatest stores in the best retail city in the world and our ambition is to create an entire experience that reflects the best of what we have to offer,” said Pete Nordstrom, co-president, Nordstrom, Inc. “We think the modern exterior glass design combined with the historical renovations honor both the past and future of Manhattan. We look forward to the day when we can open our doors and welcome customers.”

Central Park Tower – Stunning glass façades created by James Carpenter Design Associates(JCDA) of New York fill each floor with light, while at the same time projecting the beauty and energy of the interior to the street. Customers will be able to shop retail space located on seven levels, two below street-level and five above. A seven-level atrium at the heart of the building, also designed by JCDA, highlights the escalators connecting each floor. Entrances are located on both West 57th Street and West 58th Street.

The Tower portion also incorporates the landmark façade of the former 1780 Broadway building which will be completely restored and three new two-level atriums of retail space will be created in the interior. It also includes an entrance off of Broadway.

5 Columbus Circle (formerly the 1790 Broadway building) – This portion is approximately 8,000 square feet of street-level retail space with an entrance located on Broadway that connects to the main store.

5 Columbus Circle is a landmark building and Nordstrom will rebuild the street-level façade to evoke the historic design of the original building. This section is owned by 1790 Broadway Associates.

1776 Broadway – This building sits on the corner of West 57th Street and Broadway. Nordstrom will occupy four floors of retail space totaling approximately 20,000 square feet with one entrance on West 57th Street. This portion is owned by ULM Holding Corporation.

3 Columbus Circle – Located just across Broadway, 3 Columbus Circle is approximately 43,000 square feet of retail space on three levels with two entrances – one on West 57th Street and the other on Broadway. 3 Columbus Circle will be the location of the Nordstrom Men’s store. SL Green and The Moinian Group are the owners of this property.

The interiors of Central Park Tower, 5 Columbus Circle and 1776 Broadway will be connected to create a unified shopping experience.

The unique seven-level glass waveforms façades were created to catch light as it strikes through the east-west axis of West 57th and West 58th Streets, and continually changes as the sun angles shift from morning to evening, and throughout the seasons. The waveforms also provide an interactive viewing experience for customers inside the store and for those outside at street level, creating views up and down the streets while selectively displaying the activity within the store.

“When creating the store’s identity we considered the human experience from both the inside and out,” said Dawn Clark, vice-president of store design and architecture for Nordstrom, Inc.”In this amazing city of art, culture and fashion, we hoped to create a design that amplifiesNew York City’s creative energy.”

“The façades have a quality of fluidity,” said James Carpenter. “From within, you can step into the waveforms and experience the dramatic views up and down the street while simultaneously, from outside, your presence humanizes the façades. The design aims to visually invite people to envisage the store as a simultaneously accessible and urbane public space.”

The glass façades are being fabricated by Permasteelisa of Vittorio Veneto, Italy and Windsor, Connecticut. Specialized glass bending is by Cricursa of Barcelona, Spain.

About Nordstrom
Nordstrom, Inc. is a leading fashion specialty retailer based in the U.S. Founded in 1901 as a shoe store in Seattle, today Nordstrom operates 323 stores in 39 states, including 121 full-line stores in the United States, Canada and Puerto Rico; 194 Nordstrom Rack stores; two Jeffrey boutiques; and one clearance store. Additionally, customers are served online through Nordstrom.com, Nordstromrack.com and HauteLook. The company also owns Trunk Club, a personalized clothing service serving customers online at TrunkClub.com and its five clubhouses. Nordstrom, Inc.’s common stock is publicly traded on the NYSE under the symbol JWN.

About James Carpenter Design Associates
James Carpenter Design Associates (JCDA) is a cross-disciplinary design firm working at the intersection of architecture, art and engineering. Led by James Carpenter, the firm is recognized for its knowledge and use of natural light, which is at the foundation of its design philosophy. JCDA acts as the lead creative partner on projects ranging in scale from signature design features to the renewal of existing buildings and surrounding urban landscape to new buildings–in each instance providing a transformational vision.

The firm has developed some of Manhattan’s top-selling luxury condominiums, including the record-breaking One57, One Riverside Park and The Carlton House. Current projects under development include One Manhattan Square, The Kent at 200 East 95th Street, 555 Tenth Avenue, and 70 Charlton. Extell has also restored and updated a number of classics in landmark neighborhoods, including the former Stanhope Hotel at 995 Fifth Avenue and The Belnord, a landmark building on the Upper West Side. Commercial developments include the International Gem Tower, W Times Square hotel in New York City, Boston’s InterContinental Hotel and Residences and the $200 million redevelopment of Chicago’s Insurance Exchange. For more information, visit www.extelldev.com

About The Moinian Group
Founded by Joseph Moinian, The Moinian Group today owns and operates a diversified portfolio of assets across the United States and is among the only national real estate entities to develop, own and operate properties across every asset category, including office, hotel, retail, condos and rental apartments. The Moinian Group’s holdings include high-profile assets in America’s leading cities, including New York, Chicago, Dallas and Los Angeles. For the past three decades, The Moinian Group has been a pioneer in the development of emerging areas of New York City such as Downtown and West Side of Manhattan, developing commercial, residential and mixed-use projects that combine luxury living, modern office space and high quality retail. The Moinian Group maintains a reputation for developing state-of-the-art, aesthetically distinguished properties as the firm continues to strive for excellence. 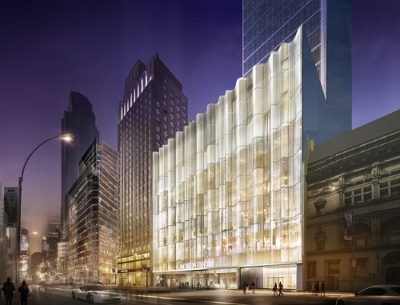