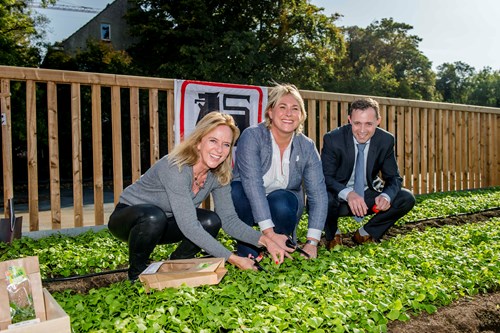 BRUSSELS, Belgium, 2017-Oct-23 — /EPR Retail News/ — Delhaize Belgium is testing an innovative “urban farm” on the roof of one of its stores in the Brussels area. The farm, consisting of a garden and a greenhouse, will allow Delhaize customers to buy freshly picked vegetables that are grown exclusively on-site. The brand is the first supermarket in Belgium to grow vegetables atop one of its stores, highlighting Delhaize’s long-term commitment to provide local, sustainable products while lowering CO2 emissions from less distribution.

For 2017, Delhaize is growing five kinds of lettuce – including baby leaf and watercress – with 5,200 plants by the end of the season. Next year, additional types of vegetables will be available, such as tomatoes, eggplant and zucchini.

Several Delhaize teams spent a year creating the 360-square-meter farm in collaboration with gardeners and other business partners. Located at the Boondael store in the municipality of Elsene, it will be operated by a company that specializes in vegetable gardens.

Delhaize, which plans to open rooftop farms at more stores if the test in Elsene goes well, announced the project during a ceremony on October 18 that included Céline Fremault, Brussels Minister for Environment and Energy. “Developing a healthy and high-quality nutritional pattern … is one of the challenges of the Brussels region,” Minister Fremault said. “This first city farm of Delhaize is therefore an excellent initiative, which fully fits into one of Brussels’ ambitions: to increase local production.”

The farm will also serve as an educational program with workshops for schools and other groups beginning in 2018.