McGee, whose appointment will begin Sept. 21, comes with considerable experience in a complex, global organization. Deloitte, a network with member firms in more than 150 countries, has some 200,000 people under its umbrella, providing auditing, risk-management and financial consulting, taxation and other services.

“His client service and global experience were very important qualities to the search committee,” said Stephen D. Lebovitz, president and CEO of CBL & Associates Properties Inc., and ICSC’s 2015–2016 chairman. “He has an understanding of how to manage an organization with diverse constituencies around the globe, including different sizes of organizations at various stages of development.”

When it comes to effective management, communication is key, McGee says. Goals need to be easy to understand, and communicated to everyone. “Clarity of strategy and clarity of purpose are critical,” he said. “I like people to feel they’re part of a team and that they know and appreciate their importance to the team.”

McGee’s principles about getting people involved extend beyond the workplace, as evidenced by his activities with numerous civic, charitable and academic organizations. He is the incoming chairman of Covenant House International, which provides shelter and counseling to homeless youth; a member of the New York Catholic Foundation Board and of the Finance Council of the Archdiocese of New York; and a member of the Board of Regents of Loyola Marymount University, his alma mater.

“I really do believe that everyone should be given an opportunity,” he said. “Not everyone has had the good fortune that I’ve had.” McGee’s parents and his older brother emigrated to the U.S. from Ireland in the 1950s, his father working as a bus driver, his mother employed in a dry cleaning business. Both valued education highly, laying the foundation for his career success, he added. “My parents were very much believers in the American dream.”

Part of ICSC’s success, he says, will be measured by how well it continues to communicate the critical role the industry plays in economic development and opportunity in every country around the globe.

McGee’s experience with the media will help ICSC deliver that message, Lebovitz said. He has appeared on CNBC, Bloomberg and Fox Business, and is frequently quoted in national media outlets, including The Wall Street Journal, USA Today and CFO magazine.

“Tom is extremely comfortable with presentations and interviews with the press,” Lebovitz said. “He will be a very effective advocate for the shopping center industry.”

McGee lives in Basking Ridge N.J., with his wife, Charlene, and two daughters. He grew up in Southern California, is an avid sports fan — he supports the Lakers — “and I’m a huge fan of golf.”

McGee is only the fourth person to head ICSC in its 58-year history. He succeeds current President and CEO Michael P. Kercheval, who this year announced his intention to retire.

“I know everyone at ICSC, staff and members are going to like working with Tom; he’s a really good guy,” Lebovitz said. “He’s smart, he’s a pleasure to deal with, and he will be a great leader for ICSC for many years to come.” 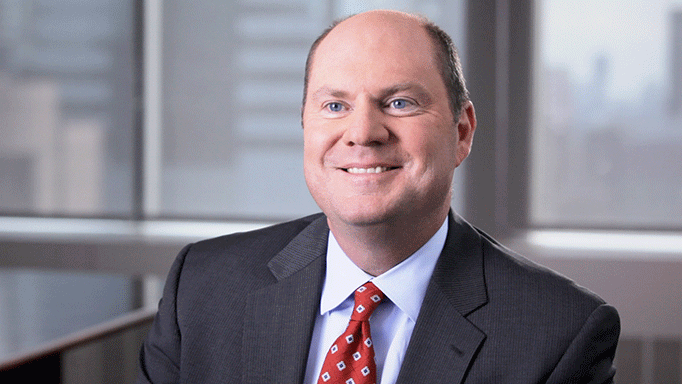