​ALEXANDRIA, Va., 2017-Aug-08 — /EPR Retail News/ — Economic optimism among American gasoline consumers held steady this month, despite a seven-cent climb in the price of gasoline, according to the latest NACS Consumer Fuels survey.

NACS, which represents the convenience store industry that sells an estimated 80% of the fuel sold in the country, has conducted monthly surveys related to economic issues since January 2013.

Gas consumers report a median gasoline price of $2.29 per gallon, up from $2.22 last month. This price increase has been felt most strongly in the South, with about two in five (42%) saying they noticed gas prices “much higher” or “somewhat higher” than last month. In the West, just a third (32%) of gasoline consumers noticed higher prices.

Despite the uptick in gasoline prices, Americans drivers remain optimistic about the current state of the economy. Three in five (60%) drivers say they are optimistic about the economy, the same proportion that said so last month in July 2017 and 16 points higher than last August when optimism stood at 44%. There are strong demographic variations in optimism; 64% of those age 50 or higher say they are optimistic, compared to 54% of those ages 18-34.

Nearly one in four consumers (24%) say that they will drive more this month, the highest percentage recorded over the past five Augusts, and nearly one in five (17%) say they will spend more.

“The convenience store industry is glad to see that consumer optimism remains strong despite the slight rise in gas prices this past month,” said Jeff Lenard, NACS vice president of strategic industry initiatives. “Resilient economic optimism is good news as consumers enter the latter half of the summer driving season.”

The survey was conducted online by PSB (Penn Schoen Berland); 1,108 U.S. adults who purchase fuel for a vehicle such as a car, truck or van at least once per month were surveyed August 1-4, 2017. Summary results are available at nacsonline.com/fuelssurvey.

NACS advances the role of convenience stores as positive economic, social and philanthropic contributors to the communities they serve. The U.S. convenience store industry, with more than 154,000 stores nationwide selling fuel, food and merchandise, serves 160 million customers daily—half of the U.S. population—and has sales that are 10.8% of total U.S. retail and foodservice sales. NACS has 2,100 retailer and 1,750 supplier members from more than 50 countries.

ALEXANDRIA, VA, 2014-12-17 — /EPR Retail News/ — The recent decline in fuel prices has resonated with consumers, 80% of whom report that gas prices are lower than they were 30 days ago and, for the first time in two years, more consumers think that gas prices will be lower in the next 30 days (30%) rather than higher (27%), according to the latest NACS Consumer Fuels Survey.

Consumers report that the average price of regular gasoline where they live is $2.70, which is 95 cents per gallon lower than the average consumer-reported price in July and marks the fourth consecutive month in which the reported price has decreased.

Lower prices also affected consumers expected expenditures in the upcoming month, with 24% saying that they will spend more than they did last month, up from 21% in November and 15% in October. Consistent with the degree to which gas prices affect their feelings about the economy, consumers ages 18–34 seem buoyed by the lower fuel price, with one-third expecting to spend more in the upcoming month.

Lower fuel prices could have a negative effect on the short-term prospects for alternative fuel vehicles and other fuel-saving measures often employed by consumers. For the first time in a year, the gas price at which consumers would try to reduce how much they drive was more than $1.00 higher than the price they are paying now and the price at which they would seek an alternative to driving neared $2.00 above current prices. This indicates that consumers are less prone to consider alternative methods of travel due to lower fuel prices.

NACS, which represents the convenience store industry that sells 80% of the gas sold in the country, conducts the monthly consumer sentiment survey to gauge how gas prices affect broader economic trends. The National Association of Convenience Stores (NACS) survey was conducted by Penn, Schoen and Berland Associates LLC; 1,110 gas consumers were surveyed Dec. 9-11, 2014. Summary results are at www.nacsonline.com/gasprices. 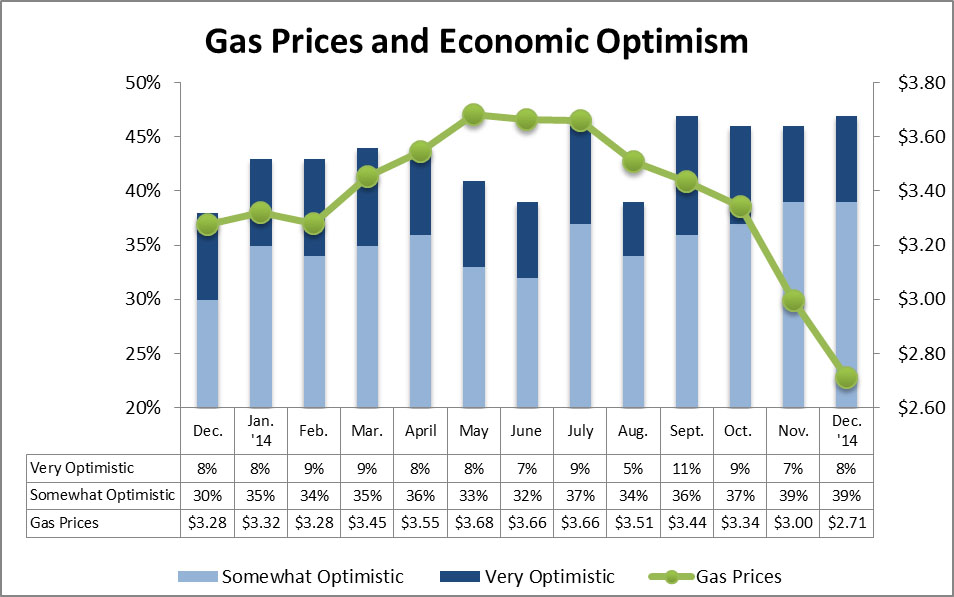