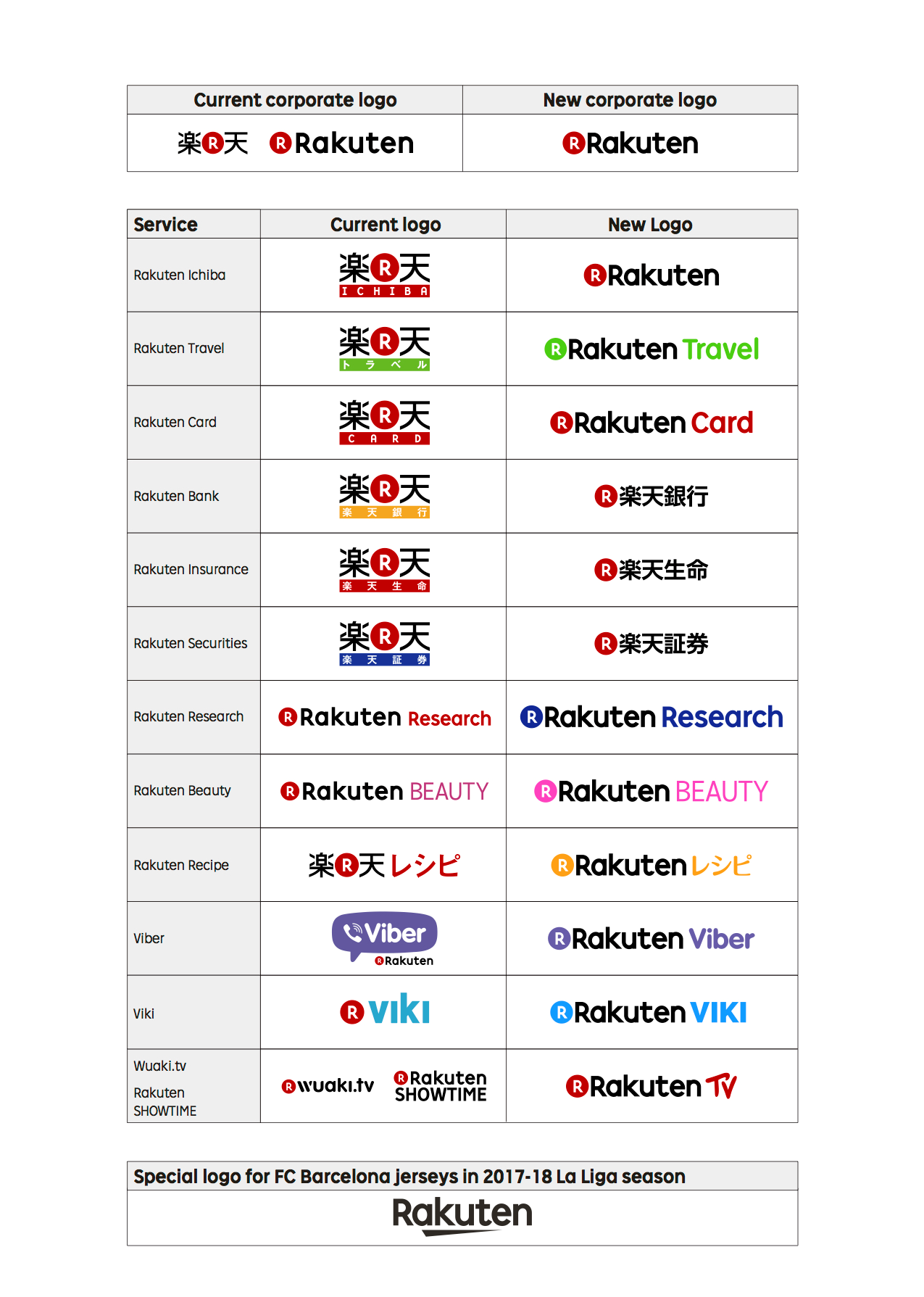 Tokyo, 2017-Jul-04 — /EPR Retail News/ — Rakuten, Inc. (TSE: 4755) today (July 1, 2017) announced that it will unify its global branding commencing July 1, 2017, to better represent its core strategy of building an ecosystem of diverse services that provide users with unique benefits. The rebranding coincides with Rakuten’s 20th anniversary and with the launch of a new global partnership with FC Barcelona, a club with one of the most recognized and respected global brands in soccer today.

Providing a more consistent identity to each of the services within the Rakuten Group lays the groundwork for our 1 billion users across the globe to more easily recognize the benefits of using more than one service. It also allows the company to develop synergies currently experienced mainly in Japan, its home market, where Rakuten’s ecosystem is the most mature. Rakuten will be better positioned to drive an increase in cross-use of services, increase the lifetime value of each member and drive gross transaction value (GTV) growth.

In Japan, the Rakuten brand is already ubiquitous due to the successful creation of a unique ecosystem that has linked services in groundbreaking ways to bring unique benefits to the user: across e-commerce, travel, fintech, digital contents, communication, credit cards, electronic money, banking, securities, insurance and professional sports. With a common membership ID and loyalty program across more than 70 services, users are able to earn and use incentive points across a myriad of online and off-line services.

“This year, as we start our global partnership with FC Barcelona, the unique and much-loved football team known as ‘more than a club,’ we will also continue to strive to be ‘more than a company,’ ” said Mickey Mikitani, Rakuten founder, Chairman and CEO. “As a company that stands for optimism and empowerment of local communities, with the unification of the Rakuten brand, we will take another step toward strengthening our ecosystem of services across the globe.”

The new global branding includes a bolder and more compact execution for the Rakuten corporate logo and a more consistent and unified approach to the branding of services in Japan and around the world, reflected in Roman alphabet logo executions and a colorful logo palette that allows each service to express their personality in a way that is respectful of their origins and of the existing user connection with the brand. The new bright and dynamic palette of colors used across the family of Rakuten services also represents the inherent diversity of the Group and the optimistic and innovative spirit at the heart of its corporate cultural values. As a core part of the new color scheme, the execution of the popular Circle R icon will appear for the first time in multiple colors, from blue to green to yellow.

The rebranding and logo changes launched on July 1, 2017, include executions on mobile and PC websites and apps, as well as offline branding in locations such as convenience stores and ATMs.

At the same time, Rakuten has unveiled a special version of the Rakuten logo developed for FC Barcelona jerseys in the 2017-18 La Liga season as part of the upcoming global partnership. This special logo will appear on FC Barcelona match day jerseys worn by the likes of Lionel Messi and Neymar Jr. Adorned with a horizontal line inspired by a calligraphy version of the Japanese character for the number “1,” this unique execution for the jerseys serves to emphasize the brand name for the launch.

Please see chart below for details of selected brand changes and the new FC Barcelona 2017-2018 jersey version of the logo.