Starbucks baristas are putting a holiday touch on the popular Flat White beverage with Holiday Spice Flat White in Starbucks® stores in the United States and Canada. The Starbucks® Flat White is an espresso-forward beverage that originated in Australia in the 1980s, made with two ristretto shots, combined with a thin layer of velvety steamed whole milk and finished with a latte art dot.

Since Starbucks launched Flat White in the United States and Canada in January 2015, customers and baristas have embraced the artistry of the beverage. To make the beverage, baristas pour two ristretto shots of spicy Christmas Blend Espresso Roast (in company-operated stores) directly into the holiday mulling spice blend, allowing the spice to steep into the coffee. Then they carefully free-pour micro-foamed whole milk into the cup to allow the espresso crema to rise to the top of the beverage for a bold coffee flavor, velvety texture and a sweeter finish.

“We were inspired by the practice of mulling cider, so we crafted our own holiday mulling spice blend of ginger, nutmeg, cinnamon, clove, sugar and a touch of tangerine. The spices and velvety milk perfectly complement Starbucks Christmas Blend Espresso Roast. The spices further develop in the warm milk and lightly enhance the flavor of the beverage. Because it’s so subtle, you don’t taste the holiday mulling spices until you take a couple sips. And then a touch of sweetness and the slightest note of tangerine flavor come through.” 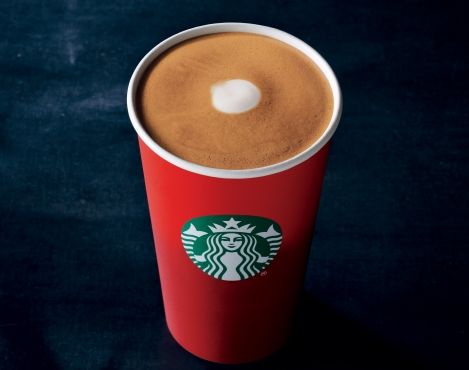