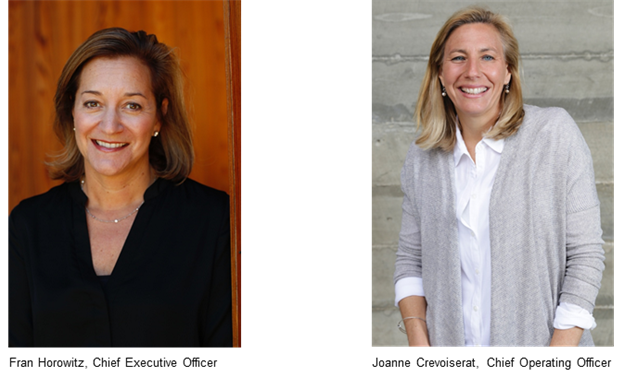 New Albany, Ohio, 2017-Feb-06 — /EPR Retail News/ — Abercrombie & Fitch Co. (NYSE: ANF) today (February 1, 2017) announced that Fran Horowitz, President and Chief Merchandising Officer, has been promoted to Chief Executive Officer of the Company.  Joanne Crevoiserat, Executive Vice President and Chief Financial Officer, has been promoted to Chief Operating Officer while continuing in her current roles.  Arthur Martinez will continue in the role of Executive Chairman.  These appointments are effective immediately.  Ms. Horowitz will also join the Company’s Board of Directors.

“Fran’s appointment to CEO reflects the leadership she has shown in the turnaround of Hollister, our efforts to provide a compelling, customer-focused shopping experience at both of our brands and, while we have more work to do, the repositioning of the Abercrombie & Fitch brand,” said Mr. Martinez.  “She is a talented, creative and dedicated executive who has energized our team around important cultural values, a customer-centric mindset and a commitment to assuring our Company’s success.  Fran’s efforts have earned her the respect of the Board and associates throughout our global operations.  We are confident that as CEO, she is the right person to lead the company forward.”

“Joanne’s promotion to the role of COO reflects the scope of her responsibilities and the important role she plays in maintaining our operational discipline and financial strength in a challenging retail environment,” continued Mr. Martinez.

“It is an honor to lead Abercrombie & Fitch’s efforts to strengthen our performance and reignite our growth,” said Ms. Horowitz. “We have made solid progress in our efforts to listen to and provide our customers with shopping experiences that exceed their expectations.  I am pleased to have Joanne, an extremely talented executive, as my partner in leading a best-in-class organization.  I am excited to work with her and the rest of the extraordinary team we have built to position Abercrombie & Fitch for future success.”

With Ms. Horowitz’s appointment, the Office of the Chairman, which has been leading the Company since December 2014, has been dissolved.

Ms. Horowitz, 53, has served as President and Chief Merchandising Officer of Abercrombie & Fitch Co. since December 2015.  She joined Abercrombie & Fitch as Hollister Brand President in October 2014 from Ann Taylor Loft, where she also held the role of Brand President.  For nearly eight years, she worked at Express, Inc., rising to the position of Executive Vice President of Women’s Merchandising and Design.  She joined Express, Inc. after 13 years in several merchandising roles at Bloomingdales, prior to which she served in various positions at Bergdorf Goodman, Bonwit Teller and Saks Fifth Avenue.  She is a graduate of Lafayette College and received her MBA from Fordham University.

Ms. Crevoiserat, 53, has been Executive Vice President and Chief Financial Officer of Abercrombie & Fitch since May 2014 and a member of the Office of the Chairman since October 2015.  Prior to joining Abercrombie & Fitch, she served in a number of senior management roles at Kohl’s Inc. including Executive Vice President of Finance and Executive Vice President of Merchandise Planning and Allocation.  Prior to her time with Kohl’s, Ms. Crevoiserat held senior finance positions with Wal-Mart Stores and May Department Stores, including Chief Financial Officer of the Filene’s, Foley’s and Famous-Barr brands.  She is a summa cum laude graduate of the University of Connecticut where she received a Bachelor of Science degree in Finance.

Abercrombie & Fitch Co. (NYSE: ANF) is a leading, global specialty retailer of apparel and accessories for Men, Women and Kids through three renowned brands.  The iconic Abercrombie & Fitch brand embodies American casual luxury.  With an updated attitude that reflects the character, charisma and confidence of today’s 20+ consumer, Abercrombie & Fitch remains true to its 125-year heritage of creating expertly crafted products with an effortless, American style.   The Hollister brand epitomizes the liberating and carefree spirit of the endless California summer for the teen market.  abercrombie kids creates smart, playful apparel for children ages 3-14, celebrating the wide-eyed wonder of childhood. The brands share a commitment to offering products of enduring quality and exceptional comfort that allow consumers around the world to express their own individuality and style.

The Company operates over 900 stores under these brands across North America, Europe, Asia and the Middle East, as well as the e-commerce sites www.abercrombie.com and www.hollisterco.com.