The campaign sets the tone for the fall season, tracing Lucas Satherley and Peyton Knight in key trends that revive androgynous style and celebrate hero wardrobe pieces. Proportions are played with and given depth through layering. The color palette contains tonal groups of traditional fall hues complimented by bright pops of color.

For Fall 2016, Forever 21 has paired classic fashion trends including boho, military, prep and sporty with ‘90s street-grunge resulting in a wardrobe that fuses men’s and women’s pieces into one. A juxtaposition of soft delicate fabrics and tough elements, the women’s collection features distressed denim, faux fur statement jackets, oversized bombers and hoodies, sleek trench coats and slip dresses that can be worn alone or layered over tees. Frayed and distressed styles with small doses of color, the men’s collection features fall staples that are perfect for everyday wear, including: bombers, graphic tees, torn and ripped paint-splashed denim and trenches.

The Forever 21 Fall 2016 Collection will launch in stores globally and on Forever21.com beginning Friday, September 16, 2016.

ABOUT FOREVER 21
Forever 21, Inc., headquartered in Los Angeles, California, is a fashion retailer of women’s, men’s and kids clothing and accessories and is known for offering the hottest, most current fashion trends at a great value to consumers. This model operates by keeping the store exciting with new merchandise brought in daily. Founded in 1984, Forever 21 operates more than 730 stores in 48 countries with retailers in the United States, Australia, Brazil, Canada, China, France, Germany, Hong Kong, India, Israel, Japan, Korea, Latin America, Mexico, Philippines and United Kingdom. For more information please visit: www.newsroom.forever21.com 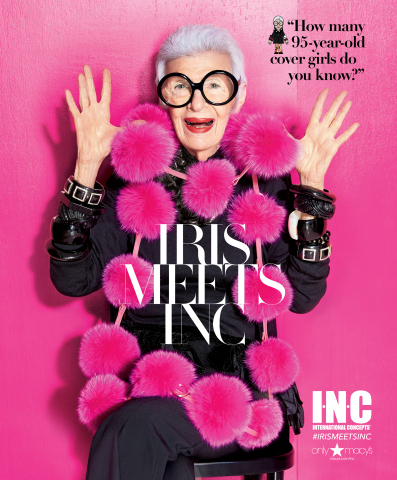 Designed by Snaps and with input from Apfel, the keyboard includes emojis, stickers and GIFs featuring Apfel, her signature quotes, and items from the “Iris Meets I.N.C” collection. The emojis also incorporate lifestyle categories, including beauty, food and beverage, and an assortment of birthday-themed graphics in celebration of Apfel’s upcoming 95th birthday on Aug. 29.

“I’m a little old for emojis and I didn’t know what they were,” said Apfel. “But everyone seems to like them, and I want everyone to have a good time. If my face makes people happy, I’m all for it.”

The creative advertising campaign, shot byBen Watts, features Apfel, both on her own and alongside model Linda Vojtova, wearing five looks from the collection. As previously announced, I.N.C teamed up with Apfel to develop a collection of approximately 40 must-have clothing and jewelry pieces that play into fall’s “mod” trend revival. Apfel consulted with I.N.C’s design team and provided creative direction on the collection, which focuses on stylish and versatile wardrobe staples and a wide assortment of her signature bangles.

The emojis will appear throughout all elements of the campaign, including product hangtags, digital advertising and direct mail.

“This is Macy’s first foray into emojis, and Iris Apfel’s campaign for I.N.C was the perfect occasion to try something we’ve never done before,” said Nancy Slavin, senior vice president of marketing for Macy’s Merchandising Group. “Iris has collaborated with other fashion brands in recent years, so we wanted to take a fresh approach. She’s an icon whose appeal spans multiple generations, and we see these emojis as a fun way to amplify the campaign through mobile first. Her fans are going to go crazy!”

Beginning Aug. 3, the emojis are available for free download on iOS and Android through the Apple App and Google Play stores.

The “Iris Meets I.N.C” collection will be available exclusively at Macy’s stores and on macys.com in early September 2016.

About Macy’s
Macy’s, the largest retail brand of Macy’s, Inc. (NYSE:M), delivers fashion and affordable luxury to customers at approximately 730 locations in 45 states, the District of Columbia, Puerto Rico and Guam, as well as to customers in the U.S. and more than 100 international destinations through its leading online store at macys.com. Via its stores, e-commerce site, mobile and social platforms, Macy’s offers distinctive assortments including the most desired family of exclusive and fashion brands for him, her and home. Macy’s is known for such epic events as Macy’s 4th of July Fireworks® and the Macy’s Thanksgiving Day Parade®, as well as spectacular fashion shows, culinary events, flower shows and celebrity appearances. Macy’s flagship stores — including Herald Square in New York City, Union Square in San Francisco, State Street in Chicago, and Dadeland in Miami and South Coast Plaza in southern California — are known internationally and are leading destinations for visitors. Building on a more than 150-year tradition, and with the collective support of customers and employees, Macy’s helps strengthen communities by supporting local and national charities giving more than $69 million each year to help make a difference in the lives of our customers.

For Macy’s media materials, including images and contacts, please visit our online pressroom at macys.com/pressroom.

HONG KONG, 2016-Aug-05 — /EPR Retail News/ — This fall, T Galleria by DFS, the world’s leading luxury travel retailer, asks the question, “What are you loyal to?” Celebrating loyalty in all its forms with its Fall 2016 campaign, T Galleria by DFS has teamed up with a cast of nine international influencers, global travelers and friends of the DFS brand to share the experiences and the values they are most loyal to. Starring American CEO and designer Tory Burch, French music producer Caroline de Maigret and British style editor Susie Bubble among others, including DFS’ own staff, the Fall 2016 campaign unfolds throughout August, September and October in-store, online and through DFS’ social media channels.

“This season we were particularly inspired by the many relationships that make up the unique T Galleria by DFS experience – from customers to sales staff, brands to retailers and influencers to fans – and we wanted to celebrate the value of loyalty, which is at the core of all these experiences,” said John Gerhardt, Senior Vice President, Creative Branding Direction, DFS Group. “Every person has a story to tell about where their loyalty lies and we were thrilled to explore that concept with our cast while taking an entire season to celebrate and thank our customers for the immense loyalty they show us every day when they shop at T Galleria by DFS.”

With 17 downtown T Galleria by DFS and 17 airport DFS stores in 14 countries – and the 18th T Galleria store set to open in Venice in October – fans of the brand will have many chances to join in on the celebration this season through an interactive, cartoon-inspired visual merchandising set-up as well as an immersive digital experience featuring campaign videos, cast interviews and travel guides at TGalleria.com.

For members of DFS Group’s LOYAL T program, the world’s most extensive, multi-tiered luxury rewards program, the campaign amplifies the special access, benefits and privileges enjoyed by those who demonstrate their “LOYAL T” to DFS. Every day, members who shop with DFS can earn and redeem points for every dollar they spend, gaining access to an increasing array of services the more they shop. Members who shop with DFS this season will enjoy exclusive gifts from their favorite brands, intimate member-only events and experiences as well as a chance to win one million LOYAL T points.

Join the campaign and share what you are loyal to, starting August 1. #LOYALT 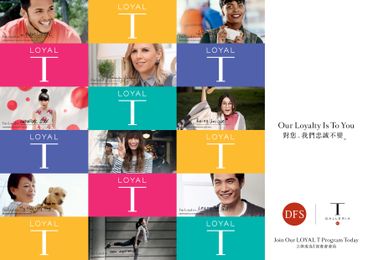 T Galleria by DFS celebrates loyalty with its Fall 2016 campaign