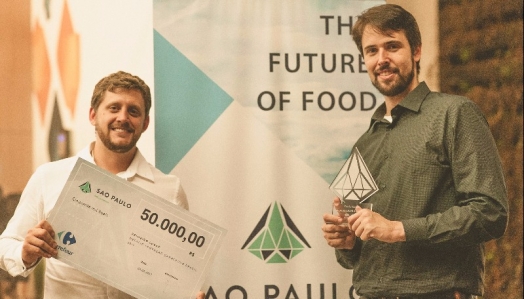 Brazil, 2017-May-11 — /EPR Retail News/ — Carrefour announced the winning start-ups of the first Brazilian edition of the Start-ups Challenge, a competition which is part of the global conference of the French NGO Hello Tomorrow. The initiative elected projects of two start-ups with innovaative solutions for food production worldwide in response to the theme proposed by the challenge: ‘Food of tomorrow for all’.  With the support of Carrefour, one of the main partners of the global event two years ago, this is the first time that the NGO has promoted the Start-ups Challenge outside France. The first place was won by CBA Sementes, followed by PW. The award ceremony was held yesterday (04), in São Paulo (SP), at the headquarters of CUBO, a non profit-making association for the promotion of technology entrepreneurship.

With an innovative project, CBA Sementes, the winning start-up of the competition, developed a technology for the production of seed potatoes by means of aeroponics.  The technique, an evolution of hydroponics, enables the foodstuff to be cultivated in suspension, that is, without the use of soil.  The so-called “air cultivation” presented by the winner does not use substrates, reduces water consumption by 98% and the use of fertilizers by 80% compared to traditional production processes.

PW, which came second, has developed biodegradable water-absorbents.  Made from fruit peel, the technology can be used in agriculture in arid regions like the Brazilian North-East. The water-absorbent is applied to the roots of the crops, creating a humid environment propitious for their development.  Among the product’s major differentials are low cost, high yield and exemption from chemical inputs.

By means of the Start-ups Challenge the organization invites start-ups and entrepreneurs to participate in challenges in order to develop new technologies and innovative solutions for the planet’s real problems.  The theme of the Brazilian competition, proposed by Carrefour, considered important pillars which the company develops and promotes around the world to encourage a healthy, sustainable and less wasteful diet.

The winners of the first and second places of the Brazilian edition of the Start-ups Challenge won cash prizes of  R$ 50,000 and R$ 20,000 respectively. In addition, Carrefour will support the development of both winning projects. CBA Sementes was also awarded two airline tickets and accommodation to participate in the Hello Tomorrow Global Summit 2017, a world meeting promoted by the NGO, on 26 and 27 October in France.   On that occasion start-ups, researchers and other guests will take part in various debates on the themes selected for this year’s conference.