Boulogne-Billancourt, FRANCE, 2014-11-24 — /EPR Retail News/ — Having turned food into a means of tackling exclusion, the Carrefour Foundation is organising its second international food collection campaign, with support from the European Federation of Food Banks and The Global FoodBanking Network.

The collection campaign started in Belgium on November 17th and then in Taiwan on November 19th. Then on November 28th and 29th the Carrefour teams will be joined by their colleagues from 8 other countries: Argentina, Brazil, China, France, Italy, Poland, Romania and Spain.

In stores, several hundred volunteer Carrefour employees will be working out in the field, lending their support to Food Bank workers and helping to raise customer awareness, as well as receiving and sorting product donations. The foodstuffs collected at store checkouts will then be redirected to warehouses for redistribution by the Food Banks to various associations which help people in need.

Carrefour, partner of the Food Banks every day since 1994

Carrefour has been a partner of the Food Banks on a daily basis since 1994. Indeed, alongside these collection campaigns, Carrefour also donates foodstuffs to various associations on a daily basis – fresh products in particular. The equivalent of 77 million meals were distributed in 2013 throughout the world, Carrefour is also the leading private donor to Food Banks in France.

The retailer also draws on its core business, sharing its expertise: Carrefour France’s Supply Chain team shares its expertise as a logistics specialist with the Food Banks through the provision of some 20 hours of skills sponsorship. The aim is to optimise the way in which warehouses are managed and orders prepared.

Furthermore the Carrefour Foundation provides the Food Banks with logistics support: it gives local branches vehicles for transporting products – including fresh products – and cold rooms for storing them. In 2014, a donation of €232,000 enabled the purchase of 12 vehicles in France and equipped the association’s local branch. Since 1994, Carrefour has financed the purchase of 182 machines for Food Banks across the world, including 143 refrigerated vehicles, 18 cold rooms, cold storage containers etc. 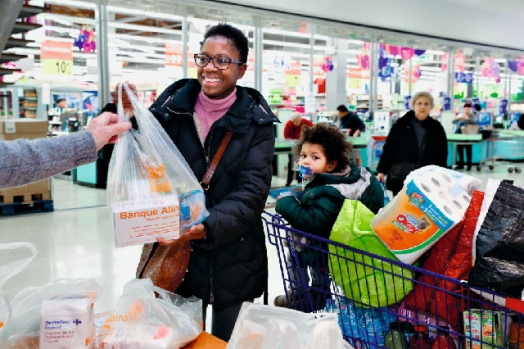