Auckland, New Zealand, 2017-Jun-08 — /EPR Retail News/ — On World Oceans Day Foodstuffs has announced that its supermarkets, which include New World, PAK’nSAVE and  Four Square, will be microbead-free nationwide from 1 July 2017; a full year ahead of the Government’s proposed date for banning microbeads from New Zealand  stores.

To celebrate going microbead free we will be running a microbead amnesty with our friends at Essano in all New World stores.  We’ll also be offering some great deals at PAK’nSAVE and Four Square. The amnesty at New World stores will start week commencing 10 July 2017.  We’ll be updating our website and Facebook very soon with the details on when and where you can bring in one product per customer containing microbeads and swap it for a free Essano Gentle Facial Exfoliator.  Keep an eye out for the update!

On World Oceans Day Foodstuffs has announced that its supermarkets, which include New World, PAK’nSAVE and  Four Square, will be microbead-free nationwide from 1 July 2017; a full year ahead of the Government’s proposed date for banning microbeads from New Zealand  stores.

Scientific research has proven that the tiny beads of plastic used as an exfoliating agent in many skin cleansing products are finding their way into drains and ultimately the marine environment where they fail to break down or are consumed by marine life.

Chris Quin, Foodstuffs North Island CEO, says the business started discussions with suppliers in 2016 with the aim of speeding up the change.  “We’re pleased to say that many suppliers had already reformulated their products substituting the plastic beads with natural ingredients. Where brands are unable to meet our needs we’ll delist the products until new formulations are available.”

Making positive change takes a collective approach. “Minimising our impact on the environment is a priority issue and banning microbeads is absolutely the right thing to do. The changes we’re making will have a positive impact on marine life – it’s great we were able to announce this change on World Oceans Day. That said we know there’s more work to be done and we will continue to see how we can reduce plastics wherever we can.

“Across the two Foodstuffs Co-operatives* we have almost 30,000 team members committed to reducing waste and our environmental impact.  Hundreds of thousands of our customers are also doing their best to make the right choices – using their own bags, choosing sustainable products and shopping thoughtfully on a daily basis.  Our suppliers are also a big part of the solution – and it speaks volumes that they have worked with us to provide customers with more sustainable products.

Foodstuffs has introduced other environmental initiatives including 100% recyclable meat trays, LED lighting, and new refrigeration and energy systems. Foodstuffs is also a foundation partner of the Packaging Forum’s Soft Plastics Recycling Programme, collecting over five tonnes a week of packaging in purpose-designed bins located at the front of stores. The material is then reprocessed into new products such as street furniture and decking.

The microbead ban will be celebrated in New World stores across the country in July.  Look out for some exciting promotions to help customers to change up their beauty routine.

Work includes the construction of seven new stores, worth around $120 million in total – four in the North Island and three in the South. Another $80 million is being spent on upgrades for 11 stores.

“Consumers are becoming more discerning about where they shop,” says Rowles. “Some want more modern facilities and a wider range of products, while others are focussed on cost savings and environmental sustainability. We are well aware of all those factors, and are investing in order to cater for these needs well into the future.”

Rowles, who only recently moved here from Australia after 13 years in retail property development for Woolworths and ALDI, says retailers are recognising the importance of putting customer desires at the centre of their planning, including the physical buildings they develop.

“Our stores need to reflect the needs of the customer and adapt and, if required, change to meet their needs. Critical aspects of our supermarkets such as car parks, aisles, lighting and refrigeration need to be tailored to meet the ever-changing needs of our customers. A business that truly places these needs at its heart is the one that will have true success into the future.”

As well as the work already underway, Foodstuffs North Island is planning a major overhaul of New World Papatoetoe, in south Auckland, with a resource consent application already lodged with Auckland Council. Work is due to start by winter 2017.

“At one end of the scale is PAK’nSAVE Queenstown,” he says, “which will cover about 5500 square metres and bring New Zealand’s lowest food prices to the Queenstown-Lakes District for the first time. At the other end is Four Square West Melton, which promises to give locals greater shopping convenience.”

“Overall, it amounts to a massive work programme for us,” Davidson says, “and a sign of our long-term commitment to the communities we serve.”

Newly constructed stores and those undergoing major refurbishments will all be kitted out with the latest in environmentally sustainable lighting, refrigeration and waste recycling systems.

As for the number of jobs that will be created nationwide, a figure is yet to be confirmed. But with three stores being completely new builds – PAK’nSAVE Tauriko, PAK’nSAVE Queenstown; and Four Square West Melton, west of Christchurch – at least 300-400 jobs are likely to be created.

“Part of the investment in our communities is the training and career advancement opportunities we offer our staff,” says Davidson. “We’re currently directing our spending to bricks and mortar, but once the stores are completed our owners focus moves onto ensuring they have the best people on the ground to meet our customer needs – training and development forms a strong part of this.” 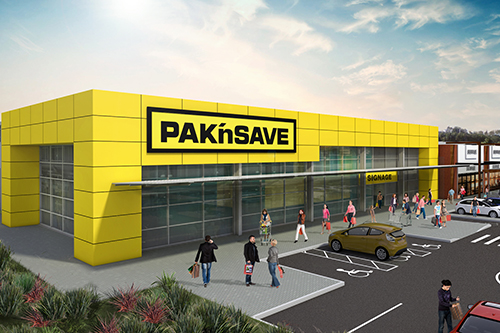